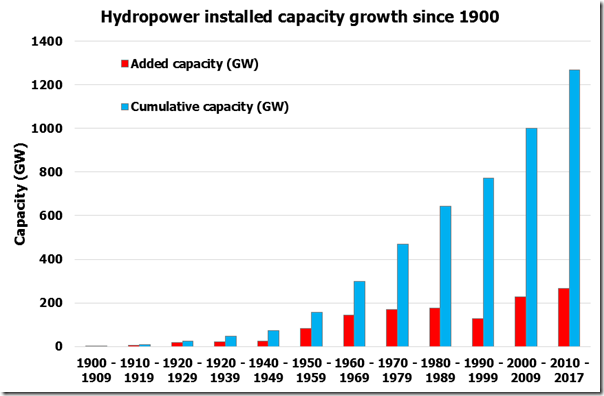 “Not long after the turn of the century, hydropower development gained a renewed momentum, particularly across Asia and South America. Between 2000 and 2017, nearly 500 GW in hydropower installed capacity was added worldwide, with growth since 2010 already outstripping that recorded in the first decade of the century.

Developing countries, including Brazil and China, needed an affordable, reliable and a sustainable source of electricity to support rapid economic growth. Since 2000, China has more than quadrupled its installed capacity to 341 GW (2017), accounting for over half of the world’s hydropower capacity growth” 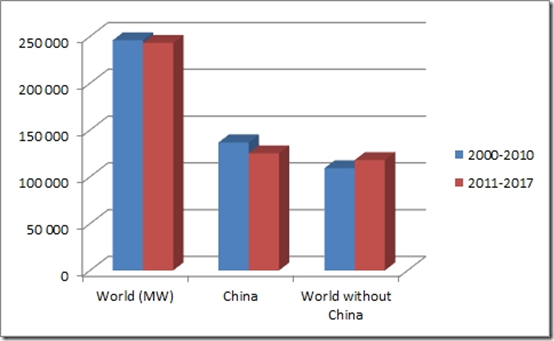 This significant rise in installed capacity and generation from hydropower according to the IHA has been driven by a variety of often interrelated factors, notably:

“Demand for energy in emerging economies

Support from the World Bank and IFIs:

While the monetary value of the World Bank’s lending is a small fraction of the total amount invested in the sector each year, the bank’s recommitment to hydropower, along with other IFIs including the Asian Development Bank encouraged greater private sector investment and engagement.

As part of the Chinese government’s ‘Going Out’ strategy and its Belt-and-Road Initiative, Chinese companies and banks invested nearly USD 25 billion in projects overseas between 2000 and 2016 and in the process have become world leaders in hydropower development. “ (As far as the RwB is informed China’s investment into overseas hydro has been much greater – likely 10 times larger than  IHA’s figure. all in all in 2017 China’s share in global hydropower investment was close to 80% ).

IHA concludes optimistically “According to the International Energy Agency (no reference provided), in order to meet the main energy-related components of the Sustainable Development Goals, including  the below two degrees Celsius commitment of the Paris Agreement, an estimated 800 GW of additional hydropower will need to be brought online over the next two decades.”

However we must point out that annual installation  of hydropower is rapidly declining due to variety of factors, notably:

– Widespread resistance from many strata of society from academia to indigenous groups whose livelihoods are being destroyed, etc. 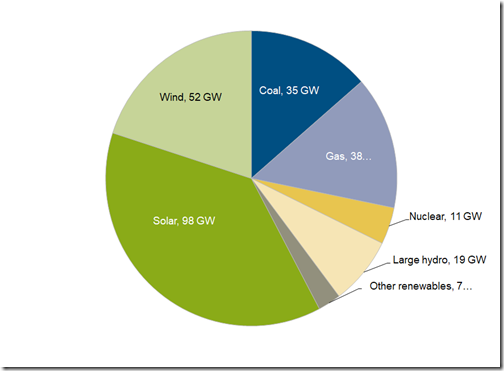 Global capacity additions in 2017 according to BNEF.

As seen from the chart below the world-wide annual installation of hydropower has been halved since 2013 and last year reached only 19 000 MW. So adding 800GW in 20 years is clearly a wild dream of  the industry bosses, while adding twice that much in wind and solar energy will take 5-6 years for a fraction of hydropower costs. 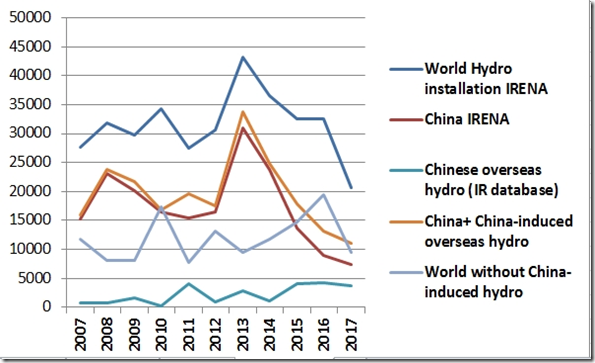 Annual growth in hydropower according to IRENA and IR. Graphics- RwB