China’s National  World Heritage Committee keeps its word! Three years ago  Dr. Du Yue, secretary general of the Chinese delegation at the World Heritage Committee Session,  listened to the RwB representative lamenting that Chinese Exim Bank was about to support the Egiin Gol Hydro Project in  Mongolia which may threaten Lake Baikal World Heritage site  and joyfully responded: “Times changed, this is unlikely to happen. And if You wait for several years, You will see China itself removing dams that affect World Heritage”. Since he was laughing, we decided that was a nice inspirational joke… Lo and behold, Dr.Du literally meant exactly what he said: 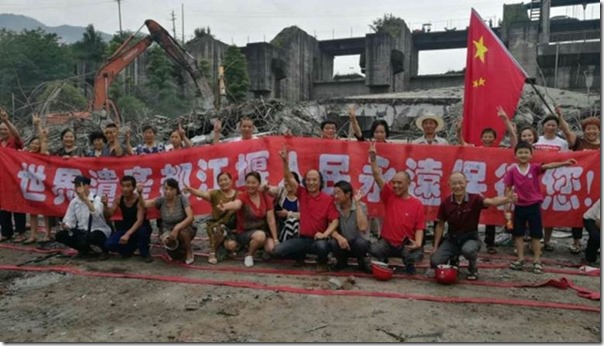 Environmentalists and community activists in China’s Sichuan province are celebrating the demolition of an illegally-constructed hydropower station located inside the buffer zone of the ancient Dujiangyan (都江堰) Irrigation System, a protected UNESCO World Heritage Site and the world’s oldest fully operational hydraulic engineering project. The Shengxing (圣兴) power station sits less than a kilometer away from the “Fish Mouth” levee, a key feature of the Dujiangyan system that for 2,300 years, has helped to protect against flooding and to channel water for agricultural use. I visited Dujiangyan last week as the Shengxing power station was being dismantled to understand how this structure came to stand inside the protected limits of one of the ancient world’s great feats of sustainable engineering and scientific progress.
The Dujiangyan system is a marvel of hydraulic engineering and human ingenuity. It splits the fierce current of the Min River (the longest tributary of the Yangtze River) in two, diverting water for irrigation of the Chengdu Plain and reducing the danger of flooding in the region. The neighboring Qingcheng Mountain is revered as the birthplace of Chinese Taoism. Dujiangyan was built around 256 BC, during China’s Warring States period, and has remained, remarkably, almost completely intact. There have been little to no changes to its meticulously-surveyed and calculated structure, and its core functions have been maintained using a combination of traditional and modern methods. The Dujiangyan Irrigation System is, as Chinese environmentalist Wang Yongchen puts it, “a living artifact.”
A core feature of Dujiangyan is that it accomplishes its function without the use of dams or reservoirs. Dujiangyan achieves eco-friendly water resource management and was built in accordance with Taoist principles of harmonious existence with nature.

Dujiangyan’s longevity is likely due to its remarkable efficacy. Research suggests that the concepts employed in the system’s construction are consistent with modern-day hydrological science. The dramatic scenery, historical significance, and scientific achievements Dujiangyan embodies has turned it into a top-tier tourist attraction for domestic and international tourists alike.
In recognition of their importance, the Mount Qingcheng and Dujiangyan Irrigation System site was accorded UNESCO World Cultural Heritage Site Status in 2000.
Dujiangyan has also received numerous distinctions from the Chinese government, including National Cultural Heritage Site, National Five-Star Tourist Attraction, and State Priority Protected Site status. Dujiangyan is protected by various national and provincial level legislation governing the protection of cultural relics, scenic spots, religious and historical sites. In light of domestic and international recognition and protection, the construction of the Shengxing power station inside the Dujiangyan protected zone, less than a kilometer from the famed Fish Mouth levee, is perhaps bewildering.
During my visit to Dujiangyan, I learned that the Shengxing episode is illustrative of a larger, global battle to balance hydropower development with the protection of significant environmental areas and our shared cultural heritage.

The Fight to Preserve Dujiangyan
The Shengxing incident is the latest in a series of recent threats posed to Dujiangyan by hydropower development. The massive 760-megawatt Zipingpu Dam, which scientists have linked to the devastating 2008 earthquake in Sichuan, was built in 2001 despite fierce protests. In fact, Dujiangyan initially qualified as both a World Cultural and Natural heritage site, but lost the ‘Natural Heritage’ designation after the Zipingpu Dam’s construction. Plans for another dam further upstream, at Yangliuhu were abandoned in 2003 after a strong civil society and media campaign prompted public outcry across the nation. 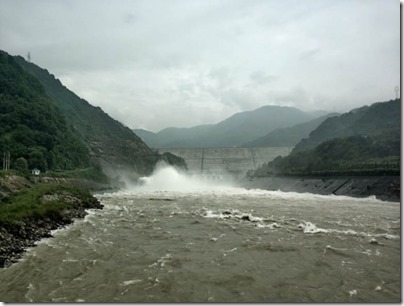 The Shengxing power station occupied more than 80 acres within the Dujiangyan protected area. To power its twin 5-megawatt turbines, it utilized the adjacent Mo‘ertan Reservoir, which holds the emergency water supply of both Chengdu and Dujiangyan municipalities. This might have avoided the expense of building a separate reservoir, but was set up without the permission of either municipality.

The construction and destruction of the Shengxing power station
In 1973, a small-scale hydropower station called Zipingpu Power Station was built on a channel of Dujiangyan’s Outer River. It was leased by a private citizen in 2005, who then joined with other shareholders in 2012 to form a joint holding company called the Shengxing Investment Company. One body that invested heavily in this new company was controlled by the Dujiangyan Administration Bureau, a government office primarily responsible for overseeing the management of local tourist areas such as Dujiangyan.
Using their positions of influence, these public officials were able to authorize the Shengxing Investment Company to “renovate” the existing Zipingpu station and gain a license to generate and sell electricity.
In a protected area such as Dujiangyan, a wide range of national- and provincial-level authorities must be consulted before new construction can be approved. Any construction in close proximity to a UNESCO heritage site in China also requires the approval of the Chinese National Commission for UNESCO. The Shengxing station was never subject to any of these processes.
To avoid the complex and stringent guidelines for siting new construction inside the Dujiangyan protected area and buffer zone, the Shengxing shareholders used the old site to fool various bureaus within the Dujiangyan government and gain approval for the new project, without the need for an EIA or other important safeguards and review mechanisms.

Throughout its construction and even after the station began to feed energy into the local grid, local villagers and community activists had made repeated requests to local officials for the appropriate documentation, or for meetings with the Shengxing company, but were met with silence or refusals.
The tireless and courageous work of community activists and the growing frequency of media reports exposed the full details of the corruption and misuse of state property by Dujiangyan City officials. Shengxing stopped its operations in early 2017, and in August 2017 the Dujiangyan City government ordered the demolition of the illegal Shengxing station. The government officials were disciplined by the Communist Party, but faced no civil or criminal charges.
Although it took until just last week for the demolition crews to arrive and finally tear down the structure (the Shengxing Investment Company apparently held out some hope of bringing the structure into compliance), the community activists and environmentalists I spoke to were understandably relieved at the conclusion of this latest chapter in the fight to preserve Dujiangyan for future generations, and maintain the special character that makes it a vital, invaluable link to the past.
“Dujiangyan belongs to everyone,” one activist told me. “It’s China’s, and it’s yours as well.” 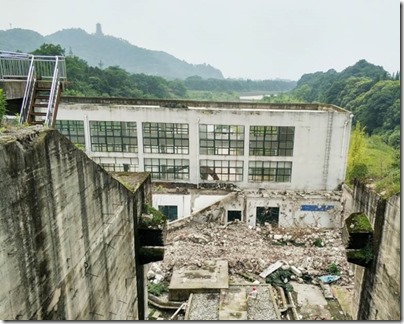 The Qinyan Tower at Dujiangyan is visible from the top of the Shengxing power station. by Sam Smith

The Chinese government is taking a more active role in protecting important domestic sites such as Dujiangyan. President Xi Jinping stated in a 2016 speech that more should be done by local governments to protect significant cultural and historic relics from harm and balance economic development with preservation efforts.
This renewed domestic focus on cultural preservation stands in contrast to the track record of Chinese investors and contractors operating outside of China. Large Chinese-built and operated dams and hydropower stations that inundate massive areas, alter ecological flows, and reduce biodiversity threaten the integrity of a number of important World Cultural Heritage and World Natural Heritage sites around the world.
While many multilateral funding institutions have shied away from projects that threaten important UNESCO-certified Cultural or Natural World Heritage sites, Chinese banks and state-owned hydropower firms have demonstrated a willingness to step in and provide funding, as in the case of the Gibe 3 dam in Ethiopia, which threatens the UNESCO-inscribed Lake Turkana National Parks.

International Rivers has called on Chinese institutions involved in both the financing and construction of dams to exercise caution and consider the historical, spiritual, and scientific importance of their project sites.
The Chinese government must ensure that even as it works at home to protect and conserve its own historical and cultural relics such as Dujiangyan and precious natural spaces like the Three Parallel Rivers Area, the actions of Chinese companies abroad, especially state-owned enterprises, do not compromise the integrity and authenticity of other invaluable manmade and natural wonders around the world. International Rivers will continue to support partner organizations around the world in bringing these issues to light and will continue to inform Chinese hydropower firms so that they understand and mitigate the impact of their projects on the ecological, economic, spiritual, and cultural health of local communities around the world.