Dauria project is one of  8 members of UNECE Water Convention pilot projects on adaptation to climate change in transboundary basins.(See UN review of all projects)

Background: of the project.

1.        -Strategic assessment of river management options in the light of climate adaptation

2.        -Establishing wetland monitoring system  in both Argun and Ulz basins

3.        -Enhancement of protected areas network as one of key adaptation measures

The project seeks to develop and promote science-based adaptation measures to complex cycling climate of Dauria region, which is severely affected by global warming. The project addresses domestic and international policy-making, as well as selected conservation and monitoring practices in the field. We also seek to create a platform for scientists from interested countries to advance understanding of dynamics in Dauria ecosystems under climatic and anthropogenic influences.

2) Data collected on habitat and biota conditions on key water courses and water bodies during the dry phase of climate cycle. Hydrometeorologycal data for the entire period of instrumental observation were obtained and are available for needs of the pilot project. 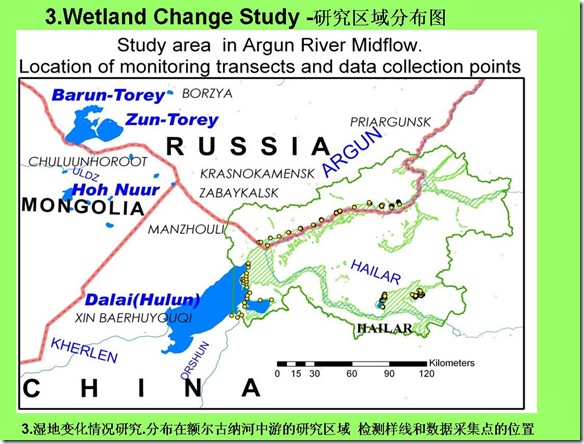 Formation of ecosystems monitoring network was completed in the transboundary part of Argun and Onon rivers and Torey lakes basins. The netwok includes more than 200 wetland and steppe monitoring plots and transects in Russian, Mongolian and Chinese parts. In collaboration with the Institute of Natural Resourses, Ecology and Cryology of Russian Academy of Sciences hydro chemical and hydrobiological field studies at 11 lakes of the basins were carried out. An agreement with WWF Mongolia for complex monitoring (climate, hydrology, biota, human activities) of Uldz river basin as a model basin with natural flow was achieved.

Complex ecosystem monitoring will make possible understanding of natural and antropogenic processes in the basin and estimation of natural and human contribution to the landscape dynamics. It will give information for developing of climate adaptation strategy and can be the tool for controlling of its realization.

Within the framework of the information collecting improving a training seminar on environmental analysis of botanical data was held in the Daursky reserve.

5) Development most of information base necessary to determine parameters of environmental flows on transboundary watercourses. Collected most relevant case-studies and methodologies from dryland rivers of the world (e.g. Australia, US, etc);

Project representative took part in official Russian inspection of the Hailaer river-Dalai-lake Water Transfer Canal and developed report recommendations on the outcomes. It was the first case of such international inspection between Russia and China. The inspection has shown that that the China water authority is ready to take measures to limit water-transfer volume but is not ready to tolerate international control and to monitoring ecological consequences of the water-transfer.

Water management plans at Kherlen River basin (Mongolia), including including dam building and water transfer to Gobi desert, were examined, and an expedition to proposed dam sites on Kherlen Rriver was carried out.