MONGOLIA made a speech at World Heritage Committee (WHC) on July 28 afternoon. 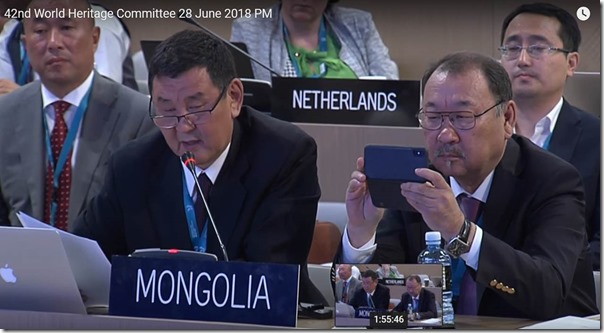 Photo: Mongolia speaking at the 42nd Session of World Heritage Committee. Left to right: unknown person, the Head of the Division of Environmental Assessment and Auditing Enkhbat Altangerel, the State Secretary of the Ministry of Environment Mr. Tsengel , the staff of Egiin Gol Hydro company.

Points made by the distinguished party of Mongolia

1. Thanks to the Kingdom of Bahrain and WHC for organizing the session

2. We inform you on progress on transboundary waters in the context of Lake Baikal

4. We also recognize severity of climate change and obligations under Paris climate agreement

5. In the light of Paris Mongolia takes relevant measures to protect water resources and develop clean energy sources, which is also consistent with SDGs. RE should constitute 20% by 2020 and 30% by 2030.

7. Frequent droughts, devastating floods caused by melting glaciers and permafrost should be addressed through sustainable use of water supply\storage.

8. Mongolia goes through due process and prepared ToRs for assessment of Shuren and Orkhon projects, which were consulted with public in 14 places in Russia and 19 locations in Mongolia in 2017.

9. Mongolia additionally prepared to conduct REA and opened TOR for additional comments by the public

10. Mongolia makes all efforts to cooperate with Russia and has fruitful cooperation and annual meetings of transboundary waters committee. Thanks to WHC for noting our cooperation in decisions

11. The last but not the least, we express sincere thanks to the state party of Russian Federation for our cooperation….

Although it pretends to conform with the Committee decisions, the speech by the distinguished party of Mongolia contains serious inaccuracies and omissions (to use cautious diplomatic language for these phenomena): 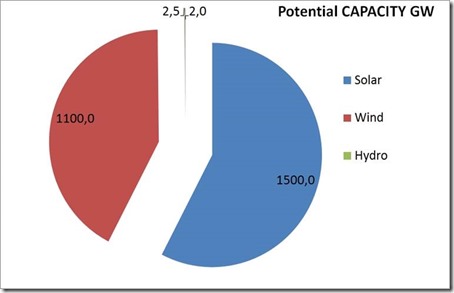 Chart: Potential of major sources of renewable energy in Mongolia

In addition, due to dry and highly variable climate, mentioned in the speech, hydropower is increasingly unreliable source of electricity supply with half of previously built power plants no longer in operation. Therefore hydropower in Mongolia has little role in providing stable energy supply and even lesser role in reducing GHG emissions.

The Paris NDC commitment by Mongolia to have 20% RE generation capacity by 2020 will be fulfilled in 2019 by new wind and solar farms. And the 2030 commitment to reach -30% could be easily met using the same resources. This is possible only in the case Mongolia drops its plans to develop up to 10GW more coal-fired power plants for electricity exports to China. Therefore, the relationship between planned hydropower in Selenge basin and Paris Agreement has been presented inaccurately and with serious twisting of facts.

"Floods from melting glaciers" is a child of imagination of esteemed State Secretary of the Ministry of Environment Tsengel. In 2017 we provided the Ministry of Environment with studies of the US and Mongolian scientists showing that no glaciers exist presently in the Selenge-Baikal basin. Water storage referred to in the speech is planned in sparsely populated areas with no cities in vicinity and thus highly unlikely to contribute to sustainable water supply. In addition, increasing evaporation from reservoir surface makes such type of supply inefficient in the light of exacerbating droughts. Supply from alluvial deposits is readily available to northern cities of Mongolia and is much more economically, socially and environmentally sound.

As for the unilaterally executed regional environmental assessment (REA) it does not conform with the requirements of the WH Committee for a joint SEA to be conducted together with Russia. Public consultations mentioned were conducted not for this REA, but for two dam-specific studies, which were scrapped after the consultations. Mongolia refused to hold full-fledged World Bank -standard public consultation for newly planned basin-wide REA and instead announced a web-based "consultation process" to take place during the Naadam national festival and summer holiday season, which clearly cannot fulfill the meaningful public participation requirements of the IUCN Guidance Note of World Heritage assessments or the WB policies.

On the bright side, we ask the WHC to note, that the distinguished party of Mongolia did not specifically mention the ready-to-go Egiin Gol Hydro Project as a stand-alone item for assessment, which is understood as the State Party agreement that the Egiin Gol project is subject to all assessments prescribed by the WHC, including SEA and REA, and is NOT going to go ahead with construction until all those assessments’ results are reviewed by the World Heritage Center and advisory bodies.