The Rivers without Boundaries Coalition addressed the World Heritage Committee which holds its 42nd Session from June 25 to July 4 in Manama, Bahrain. The RwB Coordinator, Eugene Simonov, presented a resolution “ On the Dam Damage: Water Infrastructure Threatening World Heritage” adopted by the 5th World Heritage Watch Forum held by CSOs immediately before the Session.

Podcast of Eugene’s intervention at the Session 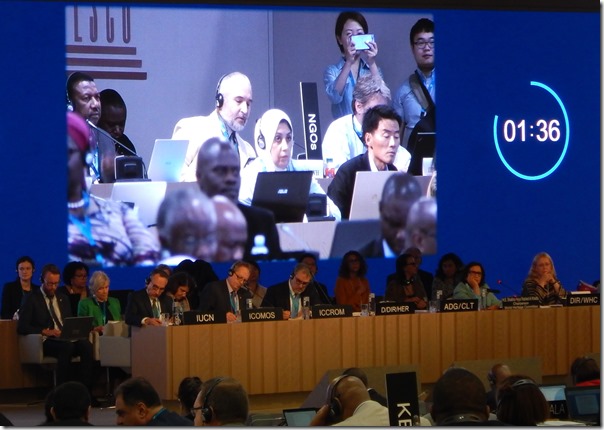 On the Dam Damage:

Impacts from water infrastructure in the basins where WH properties are located appear to be the most serious and irreversible factor in their degradation, exacerbating the long-term effects of climate change. Before it is too late, Parties of the Convention are asked to ensure that World Heritage properties do not fall victim to competition for water, power and international investment.

Decision 40 COM 7 of the Committee adopted in 2016 "considers that the construction of dams with large reservoirs within the boundaries of World Heritage properties is incompatible with their World Heritage status, and urges States Parties to ensure that the impacts from dams that could affect properties located upstream or downstream within the same river basin are rigorously assessed in order to avoid impacts on the Outstanding Universal Value (OUV)[1]".

At the 42nd Session, items opened for discussion include properties threatened or degraded both by dams upstream, as well as dams planned inside boundaries of heritage properties. We urge the Committee to immediately inscribe on the List of World Heritage in Danger the Lake Turkana Parks in Kenya impacted by the Gibe III dam in Ethiopia[2], and undertake all measures possible to stop construction and forest clearing for the Stiegler’s Gorge hydropower which is incompatible with the World Heritage status of the Selous Game Reserve in Tanzania.

The key solutions for proper implementation of Decision 40 COM 7 are:

Timeliness of implementation of specific decisions. The lack of timely implementation of decisions taken by World Heritage Committee in past sessions is observed with great concern. It results in increased threats and damage to WH properties. These, for example, include cases in the Russian Federation, which failed to complete several requested EIAs, such as one on water level regulation in Lake Baikal[3], and the Lower Omo River Valley in Ethiopia threatened by impacts of Gibe III Dam2. Both sites reflect the lack of consequences associated with delays and non-compliance by States Parties.

There is support for the Committee’s draft decisions 42 COM 7B.76, 42 COM 7B.44 and 42 COM 7B.92 prescribing complete and comprehensive SEA\EIAs on water level\flow regulation impacts and the requirement to design property-wide ecological monitoring systems.

SEAs should be applied on all World Heritage sites that potentially could be threatened by energy and water infrastructure projects. It is reuquested that the WHC specify deadlines for these urgent actions. This will harmonize and limit inconsistencies in the application of WHC recommendations by providing compliance mechanisms for practical enforcement, thereby reducing the rate of non-implementation of WHC recommendations.

Addressing transboundary impacts. Many sites (25% of those affected by water infrastructure in 2018) are threatened across the border by infrastructure built in another country, often ignoring Article 6 of the Convention. Countries such as Turkey[4], Ethiopia, Bhutan, Mongolia, Kenya, Brazil, Panama are operating, developing or planning dams which may threaten World Heritage sites in adjacent countries. It is suggested to use Article 6 of the to act pre-emptively rather than reactively, asking parties to assess potential transboundary impacts on World Heritage routinely while doing basin management planning.

Insufficient investment safeguards. The Convention bodies arealso urged to extend outreach to financial institutions partnering with states parties in infrastructure projects which may potentially lead to degradation of the OUVs of heritage sites. Some national and international finance institutions (IFIs) have already included wording on avoiding harm to the World Heritage in their adopted or proposed[5] policies. However, it seems advisable, that the Committee adopts a decision addressing financial institutions established by convention parties, recommending that they adopt the wording of the Decision 40 COM 7 as a minimal requirement for safeguarding heritage sites from impacts of water infrastructure. Good IFI examples should be praised and/or showcased, as for example, was the case with the China Export-Import Bank, which in consultation with the State Party reallocated to alternative projects a US$1bn loan for Egiin Gol Hydro after learning that its potential harm to Lake Baikal World Heritage has not been assessed.

Need to streamline and support pre-emptive early use of the SEA tools. The Convention bodies should also call on states parties and the IFIs to support timely basin-wide SEAs before any large water infrastructure project is planned in detail in a basin containing a World Heritage property. Such strategic assessments must incorporate analysis of technological alternatives, especially now that hydropower is rapidly losing its relative advantages to other types of renewable generation as they become more economic and viable. The Committee is calles upon to increase capacity to provide advice to States Parties on SEA design and implementation and to strengthen oversight of compliance to achieve effective results. Additionally, it is advisable to recommend that any State Party planning or permitting large project investments in a basin where a World Heritage Site is located, should, at the earliest stage of planning, notify the World Heritage Center on the nature of the planned investment and whether, in the Party’s opinion, it may affect OUVs and thus require an SEA. It is also recommended to develop case studies on well-implemented SEAs to inform parties involved in implementing such decisions.

Coordination between and within conventions and international organizations on climate change policies, so that those also promote nature conservation or at least do not support destruction.

There is a need for coordination between the World Heritage Convention, the Bonn convention and other environmental conventions on one side and the Secretariat of the UN Framework Convention on Climate Change (UNFCCC) to ensure that adaptation and mitigation measures do not have any harmful impacts on World Heritage Sites.[6] This is an urgent matter since some states parties have included hydropower development potentially damaging to World Heritage as part of their NDCs under the Paris Agreement[7]. In relation to that we express concern that UNESCO plans to co-host the International Hydropower Congress in Paris in 2019, which will promote large hydropower as a "climate solution ". The hope is that UNESCO can at least insist that a special session of that Congress open to non-IHA CSOs is organized to examine issues raised in this resolution.

The Committee is urged to recognize the need for actions outlined above, and to take appropriate measures.