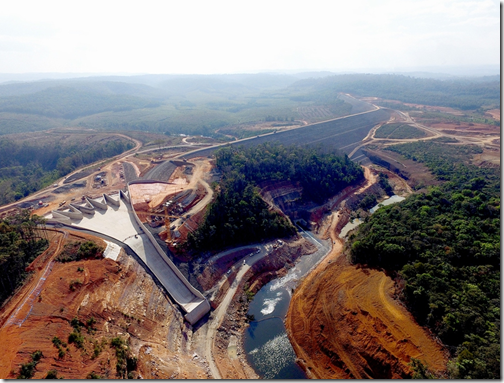 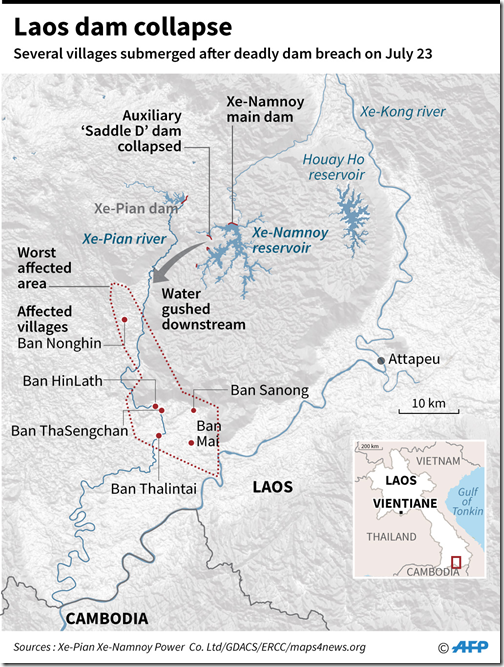 Dam collapse Did NOT stop dams  in Laos

The July collapse of the Xe-Pian Xe-Namnoy saddle dam in southern Laos and the widespread disaster that followed made international headlines.

Shortly after the Xe-Pian Xe-Namnoy collapse displaced thousands and claimed at least 40 lives, the Mekong River Commission called the dam break a national tragedy, but also an opportunity. It’s one that “ushers in new hope for a more optimal, sustainable, and less contentious path for development of one of the greatest rivers in the world,” MRC CEO Pham Tuan Phan said in a statement at the time.

Civil society groups say govt toll of about 40 is not credible, that 800 or more people could have died in July; while Korean lawmaker claims the firm building the dam altered the design and lowered the height to boost profit.

The Lao cabinet issued the instruction at its monthly meeting for October. Outlining its main work for November, the cabinet asked the committee, which was established in August to carry out an investigation into the July 23 accident, to conduct the enquiry in a transparent manner so that its findings were acceptable both domestically and internationally.
Since the enquiry began, the public has not been notified of any significant progress or findings. Despite the government’s pledge of a transparent and acceptable investigation, some outsiders have expressed concern over the degree of transparency and accountability of the enquiry and its results.

The Lao cabinet in October  also told another ad hoc committee, which was formed to inspect safety standards at all hydropower dams under construction as well as those that are operational, to accelerate its work.
While the inspections are taking place, the government has ordered the suspension of the consideration of new proposals to survey and invest in hydropower projects. This will give it time to review safety standards as well as its hydropower development strategy and plans for the future.  However, those projects for which a Memorandum of Understanding has been signed can go ahead as long as it can be shown that they meet safety standards.

Therefore repeated news that the Laos government announced a halt to proposed dams while it reviewed existing hydropower facilities in a move that pleased watchdogs is actually a fake for MOU is a document signed at very early stages of dam planning (at least in practice of Chinese hydropower firms operating overseas).

After the disaster the Lao Government  initiated prior consultations on the controversial Pak Lay dam in northwestern Laos to be invested and built by Chinese entities. The Xe-Pian Xe-Namnoy collapse may have triggered international sympathy, but it wasn’t enough to shatter the idea that hydropower should be a pillar of sustainable development along the Mekong — a farce that the World Bank has spent nearly two decades promoting.

In December 2017, the World Bank handed over the Nam Theun 2, a $1.3 billion dam partly financed by the Asian Development Bank, to the Laos government. The mega-project was positioned as the future of sustainable hydropower, said Shoemaker, , , an independent researcher focused on development issues in the Mekong region,who began following the project long before its approval in 2005. Instead, in a bid to become a socially and environmentally responsible “model dam,” NT2 failed communities, the environment, and continues to threaten local livelihoods, critics say.

Plans for NT2 can be traced back to the early 2000s, when, Shoemaker said, the World Bank began touting the concept of hydropower as one of dual purpose: To make the country richer while contributing to poverty alleviation and conservation efforts. But the community benefits attached to the mega-dam were doomed from the start.

When NT2 got the green light, several NGOs signed on to help relocate 6,000 people to the southern edge of the new reservoir site, beside an area identified for community forestry practices. The dam was operational by 2010, with 90 percent of the power exported to Thailand. But by 2012, progress reports regarding livelihoods and conservation efforts from bank-appointed external panel of experts were souring, said Shoemaker, who is co-editor of recent book “Dead in the Water: Global Lessons from the World Bank’s Model Hydropower Project in Laos.”

It wasn’t surprising to Glenn Hunt, who previously worked in the region and conducted an early assessment of the project’s social development plan. Community forestry is something that has never worked in Laos, he said, and this experiment was no different: “For one of the pillars that was supposed to be the primary source of income, it’s been an unmitigated disaster.”

The reservoir flooded farmland, meaning much of the community’s livestock soon starved and people could no longer count on their crops for income. The association set up to manage the forest largely fell apart, the sawmill will soon be closed, and the effort has not provided the third of villagers’ income it was meant to, Hunt said.

Residents were relocated to new houses, which are accessible via new roads, and the World Bank celebrated the new clinics, toilets, electricity, and water pumps in its statement declaring the closure of the project in December 2017. It’s the tradeoffs for the infrastructure that are problematic, said Niwat Roykaew, head of the Thai people’s network Rak Chian Khong Group.

Reservoir fisheries have proven to be the most sustainable pillar, though it’s been difficult to keep those outside the immediate community from fishing as well. But with an absence of other income-generating opportunities, community members are instead using the reservoir to access nearby protected land — an area that hosts several threatened species and was meant to benefit from funding and additional oversight — to poach animals and valuable rosewood.

Downstream, villagers have reported a drop in wild fish catch and loss of riverbank gardens. Shoemaker, who had conducted a livelihoods study of the community along the Xe-Bang Fai river in 2001, returned in 2014 to find that the fish market had dwindled, and low-lying rice fields had flooded.

The impact of NT2 is strikingly similar to the World Bank-financed Pak Mun dam, completed in 1994 in Thailand’s Ubon Ratchathani Province, said Kanokwan Manorum, a professor at Ubon Ratchathani University who has researched water and land governance in the area for 20 years. There, resettled villagers faced comparable losses, and turned to broom making after fish catch declined.

“The mistakes we face about the Pak Mun dam are already repeated in the Xe-Bang Fai area,” Kanokwan said. “It shouldn’t be like that. The World Bank should have learned about the impacts of the Pak Mun dam, and should make a better dam. I feel like the better dam will never happen.”

After several emails, World Bank staff said they could not reply to questions regarding NT2 on short turnaround, but pointed Devex to the final report by an international environmental and social panel of experts, particularly this portion:

"The POE [Panel of Experts] has confidence that the project is on the road to overall sustainability. It is not there yet. The solemn additional undertakings by all stakeholders to maintain their support in the years ahead provide evidence of a renewed commitment to the ultimate goal of sustainability by all parties.”

The panel of experts had refused to sign off on the resettlement program in 2015, prompting a two-year extension. Now, as part of the final sign-off, the French development agency has taken over livelihood support for the next five years. Rather than evidence of renewed commitment, it’s proof that the project wasn’t sustainable, Shoemaker said.

Report itself has an annex confirming that: More than half of objectives set to offset negative effects of a dam built a  decade ago are either not met, or “provisionally achieved” or “achieved in planning”. Although the Panel of experts oversight mechanism has obviously failed altogether, “achieved in planning” in a country like Laos likely means that with removal of international oversight none of those has much chances to progress any further.

Laos is planning to build about 140 hydropower dams in its quest to become the “battery of Southeast Asia.” But Shoemaker and other water and development experts are urging the country to consider a different way forward.

“Investors position mega-dams as ‘high risk, high reward,’ Shoemaker said. “But who is taking the risks? The bank put in all these loan guarantees to the investors, but not for the people there.”

There is little room for communities to engage and advocate on these issues, especially against the nearly nonexistent civil society backdrop of Laos, where the majority of the dams in the region are planned. Lao Dam Investment Monitor’s leader Premrudee stated she was speaking on behalf of Laos villagers, who did not feel it was safe to speak themselves. The Xe-Pian Xe-Namnoy disaster has prompted global dialogue, and she is hopeful a review of the project will inspire change, she said.

Other suggestions revolve around considering alternatives to hydropower dams altogether. International Rivers, an advocacy group that has opposed the construction of mega-dams, is calling for participatory, Mekong basin-wide planning, and comprehensive options assessment, as well as financial and technical assistance to promote energy and development alternatives. No matter what, social and environmental risk must be costed into projects, said Maureen Harris, the NGO’s Southeast Asia program director.

NT2 and Xe-Pian Xe-Namnoy are just two examples that are now being heavily studied, Niwat, from the Thai Rak Chian Khong Group, said, but he worries about the hundreds of dams proposed along tributaries in the region undergoing less scrutiny.

Xe-Pian Xe-Namnoy catastrophe  investigation is not credible so far. According to Premrudee Daoroung, there was a vast discrepancy between the 7,000 or more people said to live in the seven villages in Attapeu province that were swamped by an avalanche of water and mud after the dam collapse on July 23 and the 5,000 or so people now in camps in Sanamxay town. “Maybe 2,000 [dead] is a little bit too high. But the problem is [local] people would be very reluctant to say,” given that the regime often takes harsh action against people who speak out.

“The number of dead is very unclear … but 40 is not a believable number. One man who climbed to the top of a tree [to avoid the tidal wave of water] described how bodies were floating by all night.