At the Eighth session of the Meeting of the Parties to the Water Convention on 12 of October 2018 in Astana, Kazakhstan,  the RwB International Coordinator Eugene Simonov delivered a presentation on freshwater ecosystem preservation in the era of “Belt and Road “.(See presentation  here) 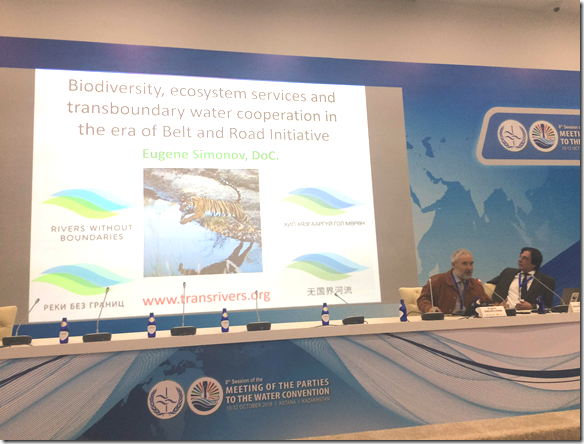 Simonov and Mazmanyanz at the side event © Oxana Nikitina/ WWF

This side event was dedicated to a joint program of the Kazakhstan and WWF on restoration of the Ili River Delta and reintroduction of tigers. However the success of the reintroduction program is dependent on transboundary water cooperation as a significant portion of the tiger’s habitat is dependent on the effective management of transboundary rivers. Kazakhstan’s program will require the restoration of an immense riparian tugay forest, dominated by poplars, that is part of the wild tiger’s historical range. This reserve will protect existing wildlife, increase density (wild boar) and reintroduce tiger prey species (Bukhara deer), and safeguard this vital ecosystem. Detailed presentation on this complex relationship was delivered by Grigory Mazmanyanz – WWF Central Asia  Program Director. The side event was attended by delegates from China, Kazakhstan, Kyrgyz Republic, Netherlands and other countries.

The event’s messages were summarized by its convener Dean Muruven -WWF Freshwater Policy Manager in a blog quoted below.

With 40 per cent of the world’s population living in transboundary river and lake basins — the Water Convention is important. It’s an international framework that helps countries strengthen transboundary cooperation and ensures that there are necessary measures in place for the ecologically-sound management and protection of transboundary water resources, both above and below ground.

Having a mechanism to manage these shared watercourses is crucial to the 3 billion people whose livelihoods depend on them — and to avoiding potential conflicts over water. But getting countries to cooperate on shared rivers is a complicated business. The Water Convention plays a crucial role in helping them to protect and ensure the quality, quantity and sustainable use of their transboundary water resources by facilitating and strengthening cooperation.

And the meeting in Astana, which sits on the transboundary Ishim River that is shared by Kazakhstan and Russia, was a particularly important one for the Convention. Not only was it the first meeting of the Parties to be held in Asia, but it was also the first time that it included members from beyond the pan-European region, after Chad and Senegal joined the Convention earlier this year. 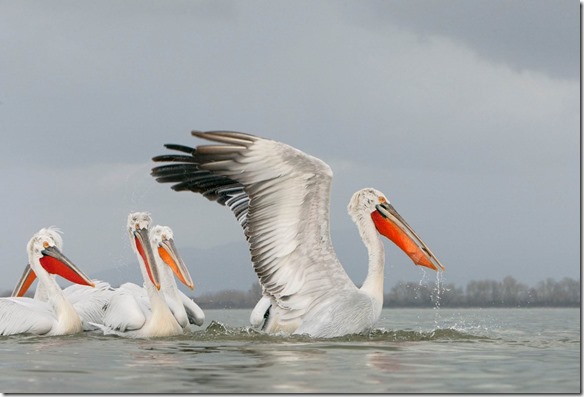 One of the most important transboundary rivers in Central Asia is the Ili. Shared between Kazakhstan and China, the Ili basin is extremely biodiverse and its delta — home to 284 species of birds, including two globally vulnerable species of  pelicans — is protected under the Ramsar Convention on Wetlands. Meanwhile, the lower section of the river flows through the designated location for a hugely ambitious joint programme between WWF and the Republic of Kazakhstan — the reintroduction of tigers, more than seven decades after that big cats disappeared from Central Asia.

The lower stream provides 80 per cent of the water flowing into Balkhash Lake — the 15th largest lake in the world and the only one that is half freshwater and half saline. It is a pretty a special place. But it is also at risk.

According to Kazakhstan’s progress report on the implementation of the Convention on Biological Diversity, by accelerating development and increasing the irrigated area in Kazakhstan and China, there is a risk that Balkhash lake could lose 86 per cent of its water reserves by 2045 — and the region would face an environmental crisis.

In particular, if the water level in the lake sinks below 341 meters above sea level due to excessive water use by agriculture, lack of cross-border cooperation on water management, climate change impacts and the poor management of water infrastructure., Balkhash lake will separate into two distinct sections with dire environmental consequences.

Traditional conservation measures on their own will not be enough to save the species that depend on the Ili River, especially in the face of climate change. The reality is that for tigers to roam Central Asia again and for Dalmatian Pelican to start thriving once again, we have to improve transboundary cooperation on water use and consumption along the Ili River between China and Kazakhstan. 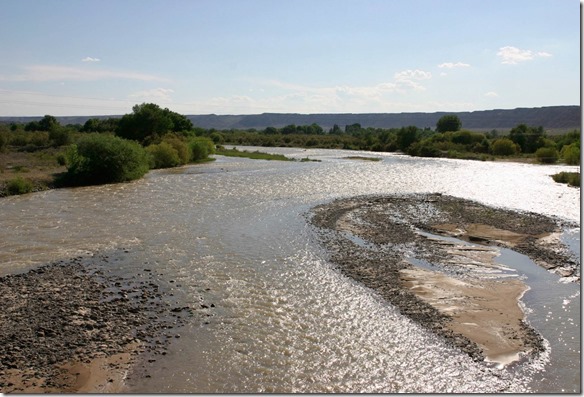 And the policy settings — and targets — exist to encourage this kind of transformative transboundary collaboration. The governments of China and Kazakhstan have relationships with the relevant conventions — the Ramsar Convention on Wetlands, and the Convention on Biological Diversity. Historically, WWF has worked with all of these conventions across the globe and together with both countries on a number of successful conservation projects. (Nowadays  China and its members look at mechanisms of globalized UNECE Water Convention for solutions in transboundary basins- RwB)

China, Kazakhstan, the Secretariats of the Conventions and WWF have a unique opportunity to meet all our common goals along the Ili River and to be part of something truly special — bringing back one the world’s most iconic species to a region that hasn’t seen it in 70 years and saving the species that are still there. Everything hinges on being able to ensure the right amount of water flowing along the Ili. And this can only be achieved through transboundary cooperation.

Which is always easier said than secured. But at least the conversations are underway, stimulated by WWF’s side event at the meeting in Astana. Hopefully, these discussions will develop into commitments to manage the river sustainably, safeguard these extraordinary ecosystems, and keep the water in Balkhash lake above the critical 341m. Then delegates to the next meeting in Asia should be able to watch crouching tigers and endangered pelicans in the same site once again.