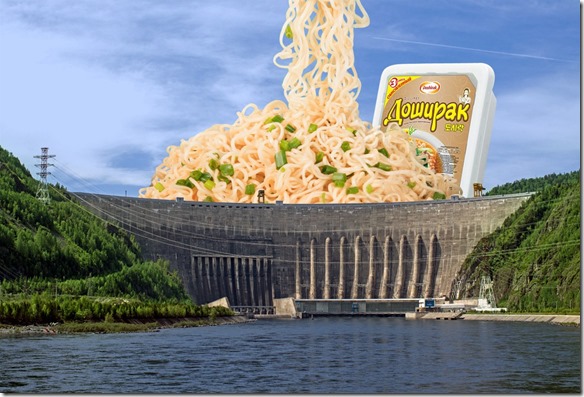 The RusHydro Company – owner of most Russian hydropower dams – is known for considerable idle  capacity at many generation facilities due to placement of large dams in remote unpopulated areas without adequate transmission links with load centers. Recently Russian hydropower plants have been marketing use of their excess energy for Big Data Centers, Hydrogen Production, Spaceship launching facilities, other fancy energy-intensive industries, but so far unsuccessfully.

The biggest of Russian hydro-dams the Sayano-Shushenskaya Hydro on the Yenisei River (best known for tragic death of 79 personnel due to collapse of generation unit during 2009 flood ) is believed to have up to 3GW of "locked" capacity not used by consumers.

On September 28, on RusHydro’s accounts in popular social networks Instagram and VK featured innovative utilization of Sayano-Shushenskaya plant’s  idle hydropower  and water resources of its enormous reservoir that exceeds 30 cubic kilometers. In a social advertisement the Company claims that this reservoir is big enough to cook 153 trillion packs of instant noodles at once (presumably, utilizing its excess power for boiling ).

Hydropower industry around the world is often struggling hard to justify use of giant dams, which are expensive and risk-prone. Since they lose competition in energy generation recently we started hearing about climate-saving hydro, fish-breeding hydro, recreational hydro, flood-control hydro,etc. However,the noodle-boiling hydro is a unique innovative solution, pioneered by Rushydro Co.

The Rushydro Co. is now reviewing its "Environmental Policy"  and in the beginning of October  plans to hold a closed meeting to solicit expert advice on the policy. Despite the fact that the company is a major state-owned enterprise the public is not invited to comment on this key document which directly affects management of the Russia’s rivers. 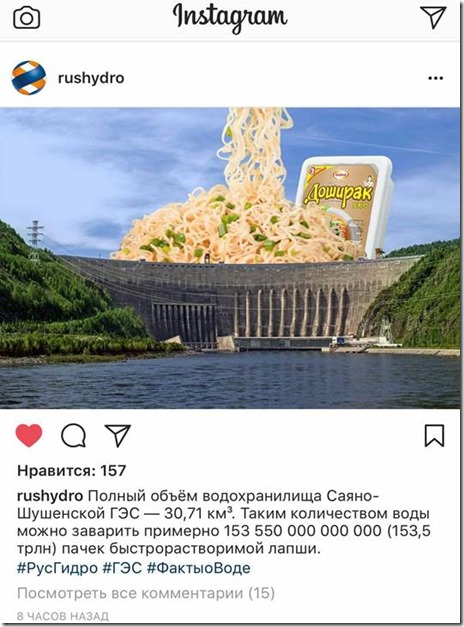 Screenshot of original post by RusHydro. Sept 28, 2017. (A day later " The author has opted to limit comments for this post")