The United Nations Special Rapporteur on human rights and the environment, John Knox assessed how Mongolia is promoting human rights in the context of environmental protection. Knox has stayed in Mongolia since 19 Sep 2017 and met with ministries, lawyers, parliament members and representatives of international and regional organizations. On September 27 he presented his preliminary observations. 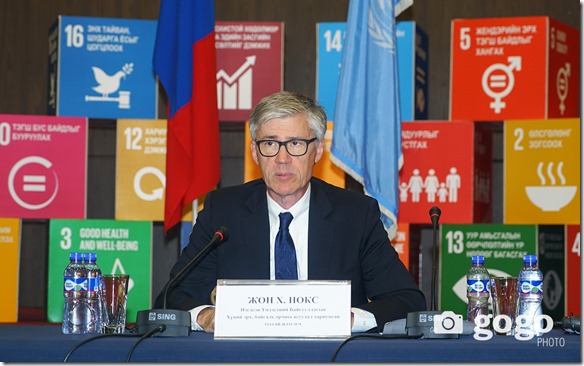 Knox, the UN Special Rapporteur on human rights obligations related to the enjoyment of a safe, clean, healthy and sustainable environment, called for Mongolia to develop progressive initiatives to eliminate harmful effects of mining and coal consumption as well as to protect the environment. He recommends the country to focus on the implementation of environmental standards and laws.

John H. Knox emphasized that due to the global warming, the climate in Mongolia is changing faster than other countries. A shortage of grazing land caused by harsh weather condition, mining and agricultural activities are threatening the world famous tradition culture of nomadic herding.

He visited Zaamar soum of Tuv province and met artisanal miners and locals. During his visit, he witnessed that the herders lost their pastures and environment as a result of the implementation of "Gold 1" program. Therefore, he recommended to review the "Gold 2" program and discuss it with locals.

Widespread illegal mining had to be tackled and environmental assessments carried out properly, the Special Rapporteur said. “I was told that impact assessments are often simply cut-and-pasted, so that an assessment of a mine in the Gobi, for example, addresses the impacts on forests found in northern Mongolia,” Mr. Knox observed, adding that local residents often learnt about projects only when the bulldozers moved in.

“This is contrary to the relevant human rights obligations,” the Special Rapporteur noted. “To comply with those obligations, the Government should conduct a full-scale, detailed assessment of the proposal for Gold-2 Program.” Even local residents opposed the project, it has been approved and started to issue licenses.

Moreover, mining activities pollute drinking water source such as rivers. He emphasized that the mining sector can benefit the economy and the lives of the people only  if they follow the standard and undergo rehabilitation after mining has finished. Widespread illegal mining had to be tackled and environmental assessments carried out properly, the Special Rapporteur said.

John H. Knox also criticized the decision prohibiting the migration from the rural areas to Ulaan Baatar in order to reduce the air pollution. Even the number of migrants to the city is increasing, the decision is violating the human right to choose their place of residence.

Ulaanbaatar city is not only having hazardous levels of air and environmental pollution but also drinking water issues. Even the city is implementing certain programs to curb the air pollution, the results may not come up quickly. Moreover, he said that rivers which are sources of drinking water were  full of garbage and ash.

Mr. Knox said the creation of the Environmental Ombudsman was his chief recommendation, but new laws on protecting human rights defenders and on public access to information were also needed.

He also urged a Government investigation into the death of conservation ranger Lkhagvasumberel (Sumbe) Tumursukh, whose death in 2015 was declared to be suicide even though he had suffered repeated attacks.  “This progression is all too typical of the untimely deaths of environmentalists around the world – threats, followed by violence, followed by murder,” Mr. Knox observed.

The Special Rapporteur will present a comprehensive report on the findings of his mission to the UN Human Rights Council in March 2018.

The RwB International Coordinator in the submission that the Special Rapporteur solicited prior to his visit to Mongolia emphasized the possible harmful impacts of the “Gold-2” Program and challenges to implementation of the 2009 “Law with long name” designed to protect rivers from mining impacts. The Rapporteur has heard our voice.

Will the Mongolian Government hear the voice of the UN Special Rapporteur?