More than 100 people left Yangon (RANGOON)  on March 23 to walk 1200 kilometers all the way to Myitsone in Kachin State, launching a national campaign to shut down the Myitsone dam project completey. Since export-oriented hydropower built by Chinese companies prevails in Burma, this is an example which Russian has to society watch carefully. 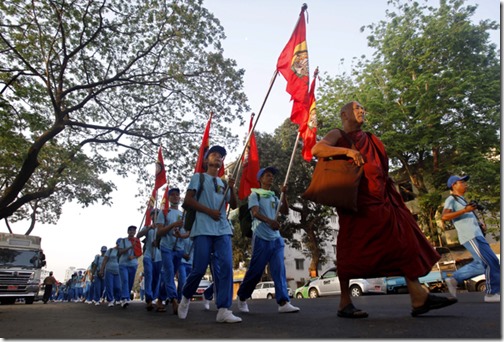 The Myitsone dam project lies unfinished in Kachin state, northern Burma, caught in a tug of war between the Burmese government and a powerful Chinese corporation. Although President Thein Sein has officially suspended the Myitsone dam project during his term, the project contractor, China Power Investment (CPI), has been applying more pressure on the government in a bid to restart the project. As a result, well-known people from various fields, including environmental experts, have been holding frequent activities to call for complete termination of the project.

The “Long March” started in Rangoon will pass through cities where the Ayeyarwady River flows to educate the public about the potential danger to the famous river and threats to the natural environment and livelihood once the dam has been built. “There will be more than 500 people by the time we reach Mandalay. We expect the number to increase to between 3,000 and 5,000 when we reach Myitkyina. We will hold a public talk on the shutdown of the Myitsone project when we reach Tanphae village. We expect the journey to take about 60 days, but it may take longer as the weather is very hot and elders and women are included in the march.”said Ye Htut Khaung, one of the activists and a central committee member of the League of Former Political Prisoners

In a report released by International Rivers at the end of last year, local and international experts have criticised the CPI’s Environmental Impact Assessment (EIA) for failing to clearly describe the numerous impacts of the dam project as it will affect not only the Myitsone area, but also residents who are living hundreds of mile downstream of the dam. The EIA also contains some serious deficiencies and a flawed conclusion, according to the report. Environmentalists objected because the Irrawaddy is Burma’s most important water resource, supporting a thriving fishing industry, irrigating Burma’s rice bowl, and supplying silt to the Irrawaddy delta. Even the authors of the CPI’s own environmental impact assessment wrote that "there is no need for such a big dam", and recommended instead two smaller dams further upstream.

Ordinary Burmese objected because the Irrawaddy is the country’s spiritual lifeblood, the subject of stories, songs and poems. With around 90% of the electricity from the dam going to China, the Burmese saw little benefit for themselves. Finally, the people of Kachin state objected because the 296-square-mile reservoir would not only submerge 63 villages, it would also drown a sacred site at the confluence of the N’Mai and Mali rivers.

Chinese Ambassador to Burma, Yang Houlan told  DVB Interview International “The Chinese government has stressed that we should have mutual beneficial cooperation and we hope that neighbouring countries would be able to benefit from China’s fast development.”

Ambassador Yang acknowledged there was not enough public consultation before the Myitsone dam project went ahead. “The feasibility studies are not enough,” he said. “There are some worries for the dam building and there involved in some cultural issues. But if the Myanmar government and people want to [re]start the project, both sides they can solve the problems through negotiations.”

Ambassador Yang said the Chinese Embassy accepted responsibility for advising Chinese companies to act responsibly and to conduct local outreach programmes. “We would like to give some advice to them — what they should do and should not do. It’s our responsibility to do more in this regard,” he said. “We encourage Chinese companies to take more input on the social affects and benefit of the local people.”

“After Myitsone dam was stopped it worried some Chinese investors. So there was a negative impact on the investment from China,” the Ambassador said.

According to Global Times “ The relatively close relationship between Chinese State-owned enterprises (SOEs) and the Myanmar military government in the past years left Myanmar public with an impression that Chinese SOEs came to benefit the officials rather than the public themselves, causing some to vent their dissatisfaction with the government against China.” In the aritcle authored by a professor at the School of International Studies at Yunnan University it states position notably different from that of the Ambassador Yang: “We have to continue pressuring the Myanmar government over the Myitsone dam project since the unilateral tearing up of the agreement caused a severe loss to the Chinese side. The project shouldn’t be a tumor in the bilateral relationship. Both countries should reach a consensus over whether the construction of the dam can be resumed and, if so, how to restart as soon as possible.”

In Myanmar (Burma) there are fifty hydro-power projects already signed and under process to be signed to begin tasks, according to official data. Only  five hydropower projects are under plan to cooperate with companies from Europe, and the Chinese companies are authorised to build and operate almost all the rest (45 projects)  for up to 40 years, according to the data.

Last month the Kachin Development Network Group (KNDP) slammed a Corporate Social Responsibility (CSR) report compiled by Chinese state-owned Chinese Power Investment (CPI). The KNDP said that local Kachin groups were never consulted about the project and that many villagers were forcibly relocated to make way for its construction. “Our Kachin people have objected to this Myitsone project ever since they started making surveys before signing the contract,” said Khun Jar from the Kachin Peace Network. “Most of our Kachin people, especially those living near Myitsone and Myitkyina, had to run away. Some of them have been sentenced to prison. This project  shouldn’t be carried out at all. Also, this is harmful for the whole country. If there is no Myitsone, there will be problems along the entire Ayeyarwady River. If the Myitsone has been damaged, all the tributaries of the Ayeyarwady, which covers 65 percent of the land in Myanmar, will be affected,” she said.

The Kachin Independence Army (KIA) has also submitted a letter to the Myanmar and Chinese governments objecting to the dam’s construction. In 2011 KIA has broken cease-fire agreement with the government to demonstrate its strong demand to shut down this project.

The Long March will continue for 70 days and culminate at the  sacred place  where Irrawady river is formed, whaich would be submerged if the dam is built.

RwB based on multiple sources.