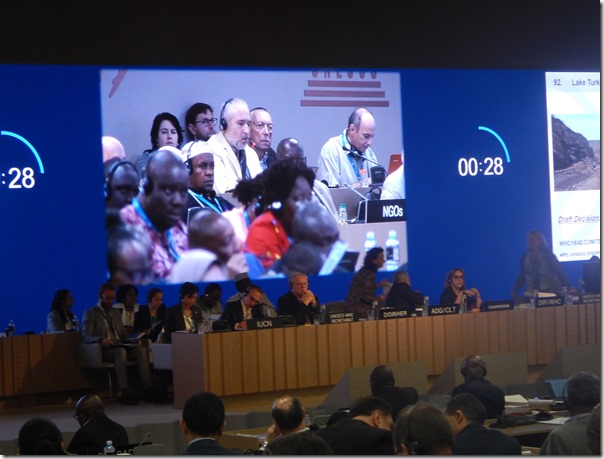 The  Greenpeace Russia and Rivers without Boundaries International Coalition (RwB) have serious concerns about the implementation of the World Heritage Committee decisions by the State Party of Russia for the Lake Baikal World Heritage Site.

Recently L. Baikal has been the arena of many changes in legal regulations and enforcement activities, most of them having rather negative consequences for the lake ecosystem. However repeated requests from the World Heritage Committee to the Russian Federation to assess environmental impacts resulting from intended changes have not been honored by the State Party. This letter focuses on developments during the first two months of 2019.

In January 2019 the Russian Presidential Council on Strategic Planning approved the National Project "Ecology", which includes a special Federal Sub-Project, "Preservation of Lake Baikal 2019-2024". The draft of this Sub-Project was extensively criticized by the Russian Academy of Sciences for a severe lack of focus on solutions to the most pressing problems, and this has persisted into the final version which contains only 5 key performance indicators:

– 1) A decrease in the discharge volume of polluted waters into the Lake by 28.2%.

– 2) A decrease of the area with extremely high levels of pollution that impacts the Lake (448ha of land-likely waste dumps of the Baikal Pulp and Paper Mill);

– 4) An 18 km2 (sic!) increase in length of engineered embankments, likely, intended to protect shorelines from erosion.

– 5) An increase in areal coverage of environmental monitoring from 75 to 93% in the Baikal Natural Area by the State.

The Action Plan for "Preservation of Lake Baikal 2019-2024" Project  includes chapter 4.2. "Introducing Changes to Federal Legislation" which includes two specific paragraphs, calling for action that may lead to a violation of the World Heritage Convention:

#4.2.2. Amending article 11 of the Law on Lake Baikal to permit the transfer of forest land to other categories of land and to conduct "sanitation felling" (preventive logging to confront pest outbreaks, often used as excuse for clear cutting in protected areas) in forests, located in the central ecological zone of the Baikal natural territory.

#4.2.3. Amending the decree of the government of RF #643 (30 Aug.2001) "On the List of Activities Prohibited in the Central ecological zone of the Baikal natural territory" to eliminate some prohibitions and limitations.

According to Russian law "The central ecological zone of the Baikal natural territory" is the territory of the World Heritage Site, so these amendments are directed at weakening its protection and most likely may harm the property.

2. Amendment of the "Norms of Allowable Impacts on the Lake Baikal".

On March 5, 2010 the Ministry of Natural Resources, in consultation with local qualified ecologists, issued an Order "On Maximum Permissible Impacts on Lake Baikal" which established scientifically justified norms for allowable impacts on the lake. Development of those regulations is required by the Law on Protection of Lake Baikal. For many years these norms have been only partly enforced and no adjustments have been introduced to reflect the experience gained during implementation. The original regulations set strict requirements for local polluters, and authorities often lamented that the regulations were impossible to enforce in practice.

Since December 2017 the Ministry of Natural Resources made various moves to weaken those regulations, first by attempting to amend Article 2 of the Law on Lake Baikal. This attempt was confronted by the public and failed, so in late 2018 the Ministry circulated a draft of amendments to "Norms of Allowable Impacts on the Lake Baikal" prepared by experts and managers of commercial wastewater engineering companies (!) and based exclusively on economic considerations. It suggested that limits on pollutant loading from wastewater discharged from temporary or seasonally used facilities (e.g. tourist camps) not be imposed. In addition, the draft increased by many fold the allowable concentrations of pollutants such as chloride, nitrate, nitrite, oil products, etc. (the only notable decrease was suggested for phosphorus emitted by larger settlements).

Several institutions within the Russian Academy of Sciences criticized that draft of the "Norms of Allowable Impacts on the Lake Baikal" for its lack of scientific justification, numerous mistakes and its unlawful approach to Lake Baikal. Nevertheless the Ministry of Natural Resources in late January 2019 posted on the government’s legal web-site its intention to pass new regulations soon and to put them into effect by May 2019. Although the actual text is yet to be posted for comment, the justification leaves no doubt that the aim of the document is:" to make compliance more attainable for entities in the Baikal Region given current economic conditions, and takes into consideration the fees for wastewater treatment".

Even experts who agree in principle that the "Norms of Allowable Impacts on the Lake Baikal" should be consistent with the best internationally available technologies (e.g. academician Professor M.Grachev) believe that the proposed amendments will lead to the fast degradation of near-shore waters of Lake Baikal due to the massive additional influx of nutrients and pollutants.

Since 1993, many settlements of the Irkutsk Oblast lie within the borders of the National Park, which imposes legal limitations on selling real estate and some other operations. President Putin, after receiving complaints on difficulties in real estate transactions during traditional "direct-line with the people", ordered that "the problem be solved". A proposal was developed by the National Park Administration in early 2019 to exclude from the borders of this protected area not just all settlements, but also areas of their potential expansion and agricultural lands used by local citizens. This "adjustment of the borders" would severely fragment and reduce the area of the National Park, leaving out some of most valuable grassland ecosystems. The proposal was recently challenged by the Baikal Nature Protection Prosecutors’ office, but problems persist and require resolution. The current situation is complicated by corruption among local authorities which leads to local people being deprived of basic rights to their houses, while the land is sold to outsiders for the development of tourist business. Experts from Greenpeace recommended that only land actually occupied by settlements be excluded from the National Park while leaving all other land categories inside the protected area.

Despite a formal establishment of the Department for Protected Areas and Lake Baikal Natural Territory Management by the Ministry of Natural Resources, the actual management of the property is worsening day by day.

Local people witness both substantial limitation of their basic rights and massive violations by outsiders who privatize coastal properties through corrupt schemes and do not observe environmental norms. Resolving problems simply by informing authorities does not work, so people take to the streets and organize mass protests on the most acute local issues.

The last such protest which collected 700000 signatures and lots of media attention was dedicated to a Chinese-owned water-bottling factory being built on a vast meadow abutting the Baikal lake shore in the Kultuk Settlement of Irkutsk Oblast. The factory, which had its EIA completed long ago and received all necessary permits, is placed in the middle of one of the most important migratory waterbird habitats along the Lake Baikal coast – Talovskiye Wetlands. This fact was well-known by authorities when they delineated this area for a development consisting of a maximum of 7 such small industrial facilities. This issue demonstrates that general regulations to protect this "world heritage site" are not translated into meaningful local policies that ensure nature-friendly zoning of municipal lands. Similar issues arise all along the Lake with development of various other facilities occurring, and this fuels popular discontent due to obvious inequality. It is increasingly difficult to convince local people who value Lake Baikal to abide by strict regulations, when outsiders and officials are allowed to violate them.

Management of the Lake Baikal World Heritage Site continues to deteriorate and it is largely beyond the control of national authorities. Management activities of responsible national authorities are directed at anything but systemic improvements (see national project above). A comprehensive strategic assessment of the management and protection of this world heritage site is essential for deciding how to improve the situation.

We hope that the World Heritage Committee will take timely measures to discuss with the Russian Federation how to reverse the negative trends and avoid inscribing of the Lake Baikal World Heritage into the "Heritage in Danger" List.

P.S. Similar letter on situation in Mongolia was sent to UNESCO by the RwB earlier.