The Rivers without Boundaries International Coalition (RwB) shared with the UNECSO its deep concerns with  spurred development of Egiin Gol Hydro Project and cancellation of basin-wide Regional environmental assessment (REA) of hydropower by the World Bank MINIS Project in Mongolia.  Later in a separate letter, the Coalition together with Greenpeace will submit observations and suggestions on the Lake Baikal World Heritage site protection and management by the State Party of Russian Federation . 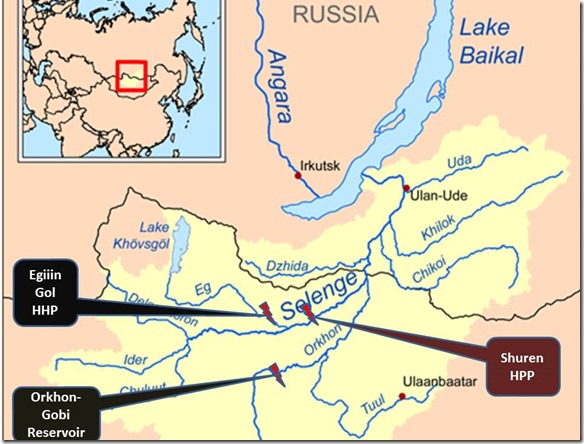 To: UNESCO World Heritage Center and

The Rivers without Boundaries International Coalition (RwB) wants to express its serious concern regarding implementation of the World Heritage Committee decisions on Lake Baikal World Heritage by the State Party of Mongolia.

At the 42 Session of the Committee on June 28, 2018 the representative of Mongolia made a special statement to acknowledge significance of the OUV of the Lake Baikal and inform the Committee about preparation of terms of reference (ToR) for the Regional Environmental Assessment of hydropower impacts on Selenge River and Lake Baikal and consultations with regional stakeholders and the State Party of Russia for improvement of this assessment plan.

In the decision 42 COM 7B.76 Lake Baikal (Russian Federation) (N 754) the Committee takes note of the intention of the State Party of Mongolia to undertake an additional study on the impacts of the Egiin Gol hydropower plant project (EGHPP) and requests furthermore the State Party of Mongolia to take into account the findings and recommendations of the 2015 mission, especially regarding assessing impacts on the habitats of endangered migratory freshwater species of the Selenga/Lake Baikal complex, and to submit this study to the World Heritage Centre, for review. The Committee also welcomes the establishment of a joint Mongolian-Russian working group on the planned hydro-technical facilities in the Selenga River basin, also reiterates its request to the States Parties of the Mongolia and Russian Federation to …jointly develop a transboundary SEA for any existing and planned hydropower and water management projects ensuring that its results guide the elaboration of EIAs of any such projects, and requests moreover the States Parties of the Russian Federation and Mongolia to also include an assessment of alternative solutions in the SEA.

On October 24, 2018 the Government of Mongolia approved Midterm National Program to execute State Policy on Energy for period 2018-2023 ( SEE Pitfalls of the Mid-term Energy Program of Mongolia). The Program schedule lists among priority measures construction of the Egiin Gol Hydro and borrowing USD 1 billion for hydropower development. This shows accelerated push to build this dam potentially threatening Lake Baikal Ecosystem and disrupting migratory pathways of endangered fish species. In the RwB’s opinion pushing forward dam construction before lengthy and complicated SEA and EIA have been fully implemented and reviewed by the World Heritage Center\IUCN likely will lead to violation of the World Heritage Committee Decisions.

In 2018 the Eg River Hydro Company held several unsuccessful tenders for "Additional impact study of the Egiin Gol Hydro Power Plant Project on Biodiversity of the Selenge River and Lake Baikal, Reference No: EGHPP-CS-2018-01". Detailed terms of reference were not made publicly available and experts requesting them were told that specific contents of assessments will be given only to bidding firms. Available documents do not explain how this assessment should be interconnected with SEA\REA, while intended timing makes using REA findings as guidance for this EIA impossible. On January 31, 2019 a new tender was announced with simplified requirements for bidding firms. However this time we could not find the public announcement in English anywhere but on a picture posted on Eg Hydro Mongolian-language web-site, which suggests that potential bidders not contacted directly by the Eg River Hydro Company were likely not been informed, neither were Russian counterparts. In the RwB opinion, holding a tender for a transboundary assessment in such non-transparent and uncooperative manner violates both recommendations issued by the World Heritage Committee and the Mongolian-Russian 2006 agreements on joint development of safeguards for Lake Baikal when designing Egiin Gol Hydro. All in all, this looks like "tick the box" exercise by hydropower company, that may enable it to inform a potential investor that it "fulfilled requirements set by the World Heritage Convention".

The new Mongolian Midterm National Program to execute state policy on energy for period 2018-2023 also prescribes to speed up inventories and feasibility studies for small and medium-size hydropower plants enabling construction of multiple additional dams. Given that most of water in Mongolia is found in Selenge River basin this clause increases necessity for joint basin-bide SEA prescribed by the Committee. So far Mongolia expressed commitment to undertake REA on its own, following consultation on terms of reference (ToR) with the Russian Government and various stakeholders, including WHC\IUCN.

The draft REA ToR revealed in 2018 did include among other items analysis of cumulative impacts from Shuren, Orkhon and Egiin Gol dams on Selenge River and Lake Baikal, as well as assessment of alternative energy and water solutions. However, unilaterally executed regional environmental assessment (REA) does not comply with the requirements of the WH Committee for a transboundary SEA "to be conducted jointly with Russia". In addition, Mongolia refused to hold full-fledged public consultation for the newly planned basin-wide REA ToR based on World Bank standards and instead announced a web-based "commenting process" to take place during holiday season, which clearly cannot fulfill the meaningful public participation requirements of the IUCN Guidance Note on World Heritage Assessments. Public has never seen response matrices promised to be released after the "commenting process" which ended in September 2018. However, REA development was still broadly seen by civil society as positive process, which should be gradually improved as it unfolds and we were expecting it to start soon.

However, in February 2019 we discovered that the latest procurement plan at the World Bank and MINIS Project web-sites refers to this assessment as "Cancelled". Request for clarification from MINIS Project managers in Mongolia resulted in very confusing explanation about "miscommunication among the stakeholders" and on February 4 we were given a promise to change the REA status from "cancelled" back to "active" in 10 days.

The MINIS Project manager also relayed to us that "the contract completion date is beyond the MINIS project closing date (Sept 30, 2019)" and the REA "process will continue until the contract signing under MINIS" and then may be transferred to a different project management unit. This sounds as bad as "cancellation", because it is difficult to ensure that the new management entity is qualified to carry out transboundary assessment project in full accordance with World Heritage requirements, WB safeguard policies and public participation procedures. It took three to four years of concerted work by WB Inspection Panel, World Heritage Committee and civil society groups to push the World Bank MINIS Project to start moving towards implementing international legal obligations and safeguards. The REA process, even if renewed, is unlikely to survive a new shift in management without severe losses.

Anyway, promised change in the REA status from "cancelled" to "active" has not happened until now (March 7, 2019), which makes us think that this crucial assessment was likely really cancelled by Mongolia authorities.

P.S.Our equally deep concerns regarding the performance of the State Party of Mongolia are subject of a separate letter.