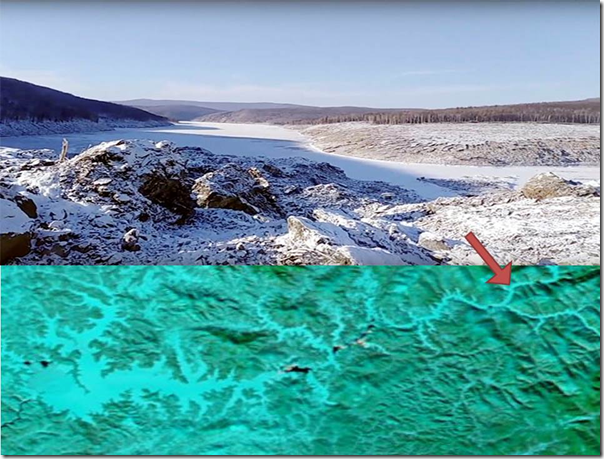 The most interesting aspect from the RwB perspective is that massive new dam 800 meters wide, 400 meters long and 40-160 meters high altering a river with the largest hydropower cascade in Russian Far East was accidentally  discovered by two local hunters around December 14. It is soothing to know that despite having zillion of satellites examining earth surface and ever increasing efforts to monitor every drop of water inflow into its mammoth hydropower reservoirs the great country still relies for  its security on simple trappers roaming deserted landscapes of Siberia…If they have not gone poaching we would never know…

Here is account of what is know by Siberian Times (shortened):

Experts are at odds over the cause of an extraordinary landfall amid reports of hot rocks and extraterrestrial meteorite fragments on a 160 metre-high hill partially now damming the Bureya, a tributary of the Amur River.

Some experts believe the phenomenon maybe a landslide but this is disputed especially by those who have visited the remote site, some 1,300 km by road from regional capital Khabarovsk.

Alexey Maslov, the head of Verkhnebureinsky district, said after witnessing the newly formed hill: ‘The riverbed is blocked by a bulk, about 600-to-800 metres wide.

‘An object entered at a sharp angle, pulled down a mound and spread it along the river bed.

‘It is not clear what it is: maybe an explosion, a bomb, or a falling airliner.’

Yet there have been no reports of rocket tests that went astray here, let alone plane crashes.

Those who have seen the carnage insisted ‘it cannot be man-made’, he said.

His view is that this was a meteorite strike from a’huge’ lump of space rock block 40 metres of the river channel.

‘We are trying to find the explanation for this incident. I insist that it was a meteorite,’ he said.

Evgeny Zubko, a cosmic dust expert from the School of natural Sciences at the Far Eastern Federal University, said an unnoticed  meteorite is a possible cause.

‘Local residents noted the arrival of a blast wave, (so) the meteorite version is to be clarified.

‘Whether it will be possible to find the fragments of a meteorite depends on the parameters of the fall – and good luck.’ 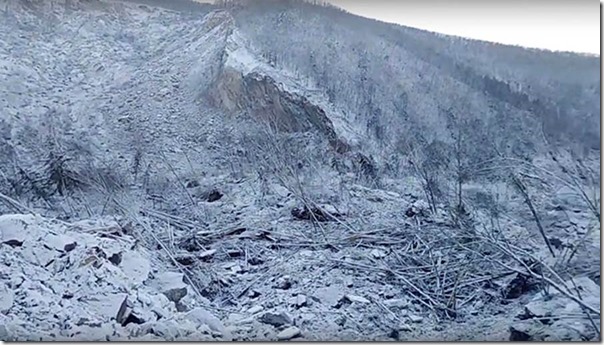 ‘It can be seen that something flew here, touched the top of the hill and landed in the water.…

Those who ventured here made videos of the phenomenon which probably formed in the first two weeks of December some 73km (45 miles) from the remote village of Chekunda.

‘This mountain was a kilometre in size – and it just vanished. And the Bureya River …is blocked.’

On another video, observers comment on how ‘trees slid down from the top of the hill (leaving) a naked desert’.

A man waves his hand standing barely visible on the debris to show the sheer scale of the landfall.

Large rocks were claimed to be ‘meteorite pieces’ and tests will be conducted.

‘You don’t come across this every day,’ said Ivanov.

‘Such scale, such force.

‘There is lots of earth, thousands of tons.

‘It can be seen that something flew here, touched the top of the hill and landed in the water.… 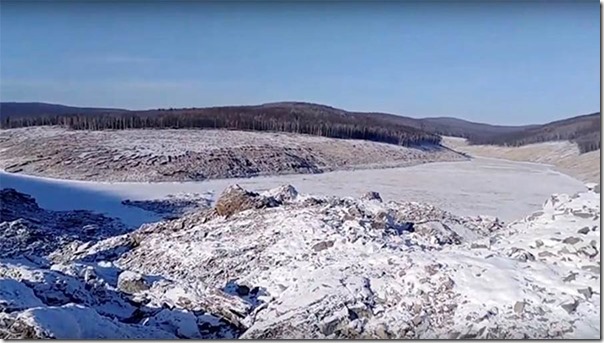 ‘This mountain was a kilometre in size – and it just vanished. And the Bureya River …is blocked.’

‘It smells like hydrogen sulphide and vapour comes out in some places.

‘We even found a spot on the very top where there are warm stones, we used them to keep our hands warm.

‘The ice edges are slim as if they were in boiling water.’

Aleksei Makhinov, regional chairman of the Russian Geographic Society, suggested it was a landslide possibly caused by seismic activity.

‘It happens very often in the (Russian) Far East,’ he said. ‘The entire coast of the Sea of Okhotsk is covered with these landslides when half a mountain falls down.’ But he believes this was a ‘seismic landslide’.

Head of the Institute of Astronomy of the Russian Academy of Sciences, Boris Shustov and Evgeny Zubko, a cosmic dust expert from the School of natural Sciences at the Far Eastern Federal University.

‘Cracks formed in rock for natural reasons and the cause of the landslide could have been an earthquake,’ he said.

‘A meteorite could have been the reason too but it is unlikely.

‘The level of water will increase, a lake will form, and water will either flow above the edge or, most likely, it will find a way and flow through the rocks in the body of the landslide.’

There are warnings of flooding upstream because of the semi-blockage.

Head of the Institute of Astronomy of the Russian Academy of Sciences, Boris Shustov, expressed doubt about a meteorite suggesting the havoc was wrought by ‘just a landslide’.

A space object would have been registered by ground based tracking systems.

‘I have looked at the data on the records of all world services, and nothing like that was present.’

We want to know answers to several  questions:

a) What are possible causes of such massive landslide without registered seismic action and obvious deficiencies of UFO and meteorite versions?

b) Is there any possible relation between landslide and artificial change in Bureiskaya reservoir water levels or any other aspect of hydropower reservoir functioning?

c) What are likely consequences for livelihoods of  local citizens, functioning of 10 cubic kilometer reservoir operation and hydropower output?

d) What is possible cost of river channel restoration to the extent it is necessary to ensure safe hydrological conditions and functioning of hydropower?