We are getting used to it: “No one was killed, we are happy” –became a standard  reaction to “better” incidents at large-scale dams   which are on the rise this year. So far in 2018 just on the RwB’s record large dam accidents happened in China, Colombia, Kenya, Laos, Myanmar, Russia. On December 13, in a “mild man made emergency” one of three gates of Dicle dam on Tigris has broken pouring water in unprepared downstream valley and partially submerging UNESCO World Heritage Site. Besides poor maintenance and lack of  public participation in water management, the case illustrates how local downstream communities feeling “protected by a dam”   quickly lose flood-adaptation skills and awareness.As waters in reservoir subside local local community also regains temporary access to ancestral graves and homes. Which dam bursts next? RwB 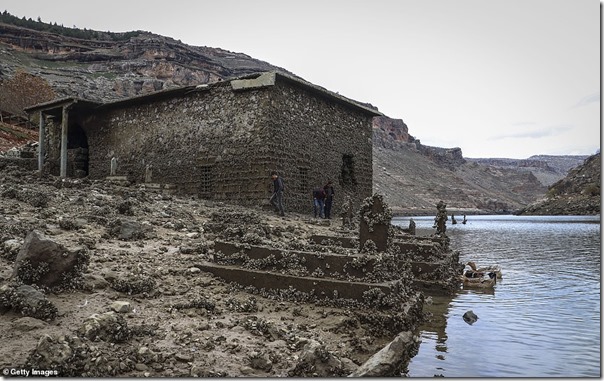 The Tomb of Elisha (Al-Yasah,  Eliseus) – a prophet of Islam, Judaism and Christianity comes into sigh decorated by mussels in Carikoren neighborhood on reservoir bottom, along with graveyards of local villagers first to be seen since submerged in 2000. Dailymail.co.uk

Disaster Flood in the Tigris – Made by a Turkish Dam
Press Release by Mesopotamia Ecology Movement , 19.12.2018
On the evening of the 13th December 2018 one of the three spillway gates of the Dicle Dam at the Tigris River in Turkish-Kurdistan has broken. Since then the water level in more than 200 km downstream river stretch increased up to 6 meters and flooded a big area of land along the river with hundreds of affected settlements. Fortunately nobody died, but the physical and agricultural destruction is enormous and unique for the last decades.
The Dicle Dam has been constructed for electricity, irrigation and drinking water supply in the north of the province of Diyarbakir with a height of 75 m and a volume of 595 Mio. m³ and is in full operations since 2000. Its reservoir has been filled so much after long and intensive rainfalls that the dam operator, the state owned energy company EÜAŞ, had to activate the spillway in order to release water from the dam reservoir. The result of the bursting of one of the three gates is the release of constantly 1600 m³ per second water. This will continue until the water level in the dam reservoir will fall 11 meters which is expected for these days. Considering that the annual average flow of the Tigris in this river stretch is less than 100 m³/sec the dimension of the flood is better understandable.
Before the construction of the Dicle and the upper Kralkizi Dam – also large – the Tigris had every 10-15 years such a high flow rate. The people along the Tigris organized live corresponding to these natural floods which have been cut with the operation of these two dams. Since 2000 people started to settle down in the former flooding areas of the Tigris River. As there were several hours for the warning by state authorities no people have been killed by the flood. But many thousands people spent the night outside with temperatures around zero degree. Among the affected areas is also the lower parts of the historical Hevsel Gardens in the city of Diyarbakir which belongs to the UNESCO World Heritage Site. Also the city neighbourhood Dicle, a number of cafeterias in the urban area, several fisheries, more than 15 sand quarries and other business facilities have been destroyed partly or completely. 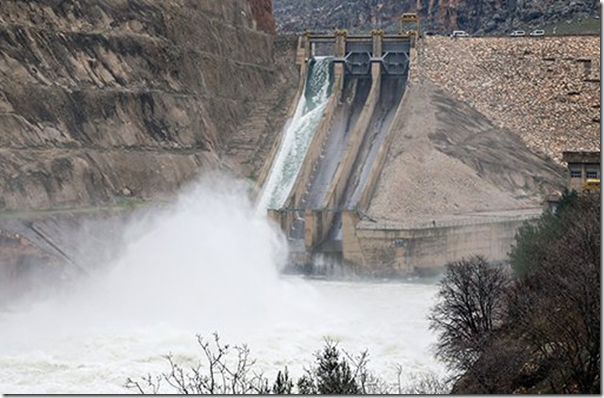 It is assumed that due to poor maintenance and lack of training of the dam personal the gate of the dam spillway has burst. The day after the chamber of civil engineers (IMO) of Diyarbakir stated that these two aspects may have contributed mainly to this disaster. In this framework for example the gates need to be replaced on time what is questioned. In the first days after the bursting of the gate, the risk was very high that the other two gates could experience the same and the upper Kralkizi Dam as well because the Kralkizi dam was also full and rains continued; luckily at a low level. The IMO criticized furthermore that “the DSI (State Hydraulic Works; responsible state body for water policies) did not take the right decisions when one week before the disaster the rain started. Because of economic reasons the dam reservoir has not been emptied at an early stage. Probably it was supposed the rain would stop soon.“ Since the disaster the dam site is controlled by the army and only few DSI employees are observed. Very limited information is shared.
The chamber of geology engineers (JMO) of Diyarbakir raised that a critical problem is that the Tigris in the upper 150 km stretch and several large tributaries are categorized only as a creek. This status means that no areas of flood risk have been classified along the Tigris river which includes the urban area of Diyarbakir. If necessary flood risk plans would have been developed and corresponding measures against settlements and other constructions in the wetlands taken, thousands of people would have not been affected gravely. In its statement on the 17th December 2018, the JMO proposed a plan how to implement a better policy. It needs to be stated that profession organizations like JMO or IMO are not included in any planning or discussion on dam and water policies.

The Mesopotamia Ecology Movement (MEM) criticized that the current state policies aim to dominate fully nature with engineering and narrow economic approaches. Further the MEM stated: „One day the nature will strike back, but in a harsh way. What we need is less extractivism and more harmony with nature. In the next days we will understand better the destruction. We think that with the mentality the state will be the source for more disasters. We need no large dams, but small solutions for water supply, developed and operated by local people which lead to much less consumption. The Tigris should not be used for electricity, rather the river ecosystem needs to be renaturated.“
The disaster caused by bursting of the spillway gate of the Dicle Dam shows how problematic and destructive the dam policies of the Turkish state is organized. It focus on maximum production of electricity and irrigation without taking into consideration peoples rights to land, livelihoods and basic services, balance and diversity of ecosystems and cultural heritage (Tigris within Turkish state is source of first human settlements). The state constructs and operates dams and related water infrastructures without any participation and transparency.
In this sense the worst case is the Ilisu Dam and Hydroelectric Power Plant at the lower Tigris in construction. If constructed it will lead to grave social, cultural, ecological and downstream impacts and consequently is one of the most controversial dams worldwide. There is still time to stop construction of the Ilisu Dam which is equivalent to highest destruction along 136 km Tigris River and 250 km tributaries and even in the downstream river parts until South Iraq.
Link for pictures see Firat News Agency (ANF), 18.12.2018