Yesterday, the WB MINIS Project concluded “commenting period” for the “Final Draft Terms of Reference for a Regional Environmental Assessment for the Selenge River basin and Lake Baikal area  in the context of the proposed  Shuren Hydro-power Plant and Orkhon Water Diversion Projects  “(REA  ToR).

The document presented on the web-site was the second version of this ToR, which has been improved following extensive comments made at “Mongolian-Russian Bilateral Expert Consultations” – closed official process that took place in spring 2018. The original draft REA  ToR to which experts  provided those comments has been never disclosed, but the comments have been posted together with the second ToR version in the form of 88-page “Response matrix”, which summarized recommendations for  all most important aspects of the planned REA and points of discontent between experts and the WB MINIS officials.

However, this document was posted only in English and Russian, but not in Mongolian (see below last line in screenshots of the same announcement on “comments period” in English and Mongolian made on August 30th, 2018). 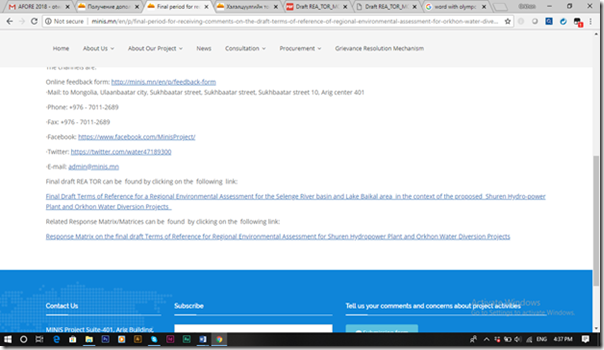 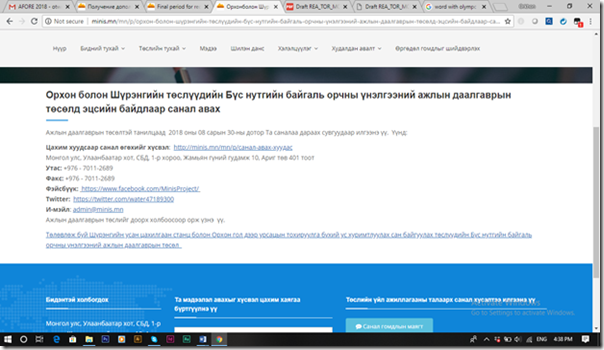 This means that all Mongolians  who may have intended to comment on “final draft REA ToR ”  were deprived of opportunity to read in their own language  the most authoritative collection of comments and recommendations on the REA process and contents!!

This again shows hypocrisy of the WB MINIS Project officials, who told RwB that they announced “consultation period” going far beyond basic WB policy requirements,  because they want to make sure that informed opinion of every interested stakeholder is taken into consideration. And this is not the first time when we argue that the MINIS intentionally impedes flow of information between stakeholders through selective translation and posting of project documents.

Another example of controversy lasting since 2015 – adamant refusal  to translate into Russian ever-changing basic management framework of the MINIS Project:”Environmental and Social Management Framework”

But the case with “bilateral response matrix” has a new important dimension. This Matrix, strictly speaking, is a part of  official bilateral negotiations and as such – the most complete list of recommendations from experts summoned by Russian Government to comment on ToR. It also  represents official position of that government. Absence  of this extensive document in Mongolian language makes us fear that  the MINIS PMU did not bother to translate and present to relevant Mongolian agencies this important information. Or worse, that it had reasons to conceal it from Mongolian officials.

Whatever the reason is, negligence or malicious intent, this looks very ugly and illustrates inappropriate manipulative handling of information very typical  for WB MINIS Project. Meanwhile, the Project’s original mandate was to help  the Government of Mongolia to make better informed decisions based on objective assessments….