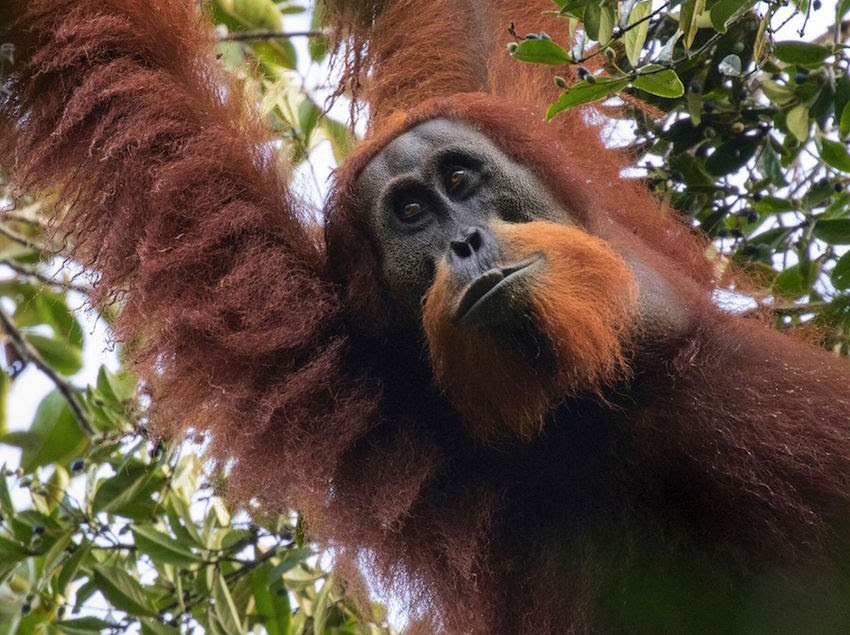 In a worldwide press release, researchers from ALERT  strongly criticized an Indonesian corporation — for using “deplorable” tactics to promote a project that would imperil the world’s rarest species of great ape.

“These tactics are simply deplorable.”

Only 800 individuals of the Tapanuli Orangutan — the rarest great ape on Earth — survive today, in a small tract of rainforest in northern Sumatra, Indonesia.

NSHE is planning a hydro-energy project that would cut across the ape’s habitat, reducing and fragmenting it, and thereby greatly increasing its vulnerability to illegal poaching, fires, deforestation, mining, and logging.

The hydro project — to be funded with more than $1.6 billion from Chinese lenders — is provoking wide and escalating criticism.

Concerns about the project have been spurred by recent articles in The Conversation, The Christian Science Monitor, National Geographic Online, and Mongabay, among others.

The advocacy group Avaaz has rapidly collected over 1.2 million signatures from those opposed to the project.

And today, the largest environmental group in Indonesia, WALHI, lodged a lawsuit against the North Sumatra government for approving the hydro scheme.

In evident panic, NSHE has hired a public relations firm that specializes in corporate crisis management.

Using intense tactics, the PR firm is attempting to sway leading scientists — including those from ALERT — who hand-delivered a letter to Indonesian President Joko Widodo last month in opposition to the project.

“The PR firm is repeating falsehoods from the dam company and attempting to confuse the public,” said Onrizal Onrizal, a forestry scientist at the University of North Sumatra.

What the hydro corporation fears most, ALERT believes, is that key funders, especially the Bank of China, will withdraw their support for the project.

Notably, the World Bank’s International Finance Corporation and the Asian Development Bank have refused to support the hydro project — largely on environmental grounds.

This is because the project would cut through some of the biologically richest rainforests on Earth, imperiling the Tapanuli Orangutan and many other threatened species, including the critically endangered Sumatran Tiger.

But Chinese financiers and Sinohydro, China’s national hydroelectric authority, have strongly backed the project to date.

China is the major driving force behind the Belt & Road Initiative, a global labyrinth of some 7,000 infrastructure and extractive-industry projects that will span much of the planet.

These projects will slice into many of the world’s remaining wild ecosystems, potentially opening them up like a flayed fish.

Right now, the Belt & Road is looking more like a global environmental crisis than anything else.  The recent collapse of several massive Belt & Road projects in Malaysia is a signal that the scheme has intense dangers and vulnerabilities.

Scientists have been adamant in their conclusions about the hydro project in North Sumatra: it is an environmental disaster in the making, and should never have been approved in the first place.

But despite growing national and international condemnation, NSHE continues to push for the project — pulling out all the stops in a desperate bid to save it.

In any other nation, and with any other financiers, it is difficult to imagine a project like this advancing.

But in Indonesia, with abundant Chinese money behind the scenes, who can tell?

It just demonstrates that when big money is involved, some corporations will go to virtually any lengths to get what they want — even with the world’s top environmental experts uniformly telling them it is a terrible idea.

NSHE should be careful — it could end up with a globally toxic reputation — losing business, influence, assets, and market share.

Prospective financiers such as the Bank of China should run away from this hydro-nightmare and from NSHE — or they will be equally guilty of ringing a death knell for one of our closest living relatives.

Press release in Indonesian is here