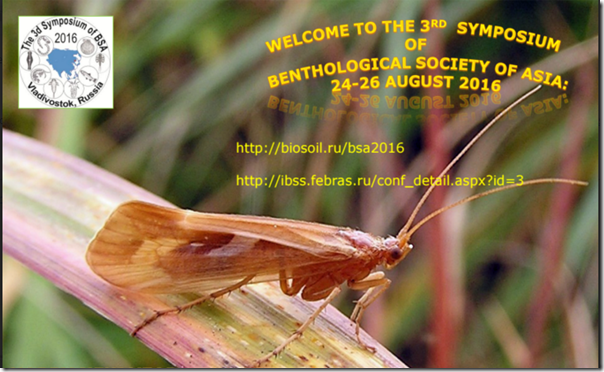 The 3rd International Symposium of the Benthological Society of Asia will be held on August 24–26, 2016, at the Far Eastern Federal University (Vladivostok, Russia).
The main goal of the Symposium is to summarize knowledge in different branches of freshwater ecology in Asia, combine efforts in protection of fresh waters, and strengthen international cooperation in the Asian region.
Symposium is followed by the 1st Youth Freshwater Ecology School on August 27–30, 2016, venued in
Biostation "Vostok" of Institute of Marine Biology (near Nakhodka City, Russia).
The goal of the Youth School to provide a platform for training of young scientists, students and even school students to attract their attention to freshwater problems and to teach them modern techniques of freshwater bioassessment.
Both events are organized by the Institute of Biology and Soil Science (Far Eastern Branch of the
Russian Academy of Sciences) and the Far Eastern Federal University, with participation of the Institute of
Marine Biology (Far Eastern Branch of the Russian Academy of Sciences).

Information about hotel(s), the cost of accommodation, and details of post‐symposium tours will be
included in the Second Circular and will be found in the near future on www.biosoil.ru/BSA2016.
We hope you will participate in the 3rd International Symposium of the Benthological Society of Asia
and the following 1st Youth Benthological School in Vladivostok; we look forward to seeing you there!
Please use the following address to contact conveners Tatyana VSHIVKOVA and Nadezhda KHRISTOFOROVA:  BSA‐2016@biosoil.ru