Bryce Stewart, marine biologist, published in “The Ecologist” his impressions from a field trip to the “Sacred Sea” this summer.  We republish it in abridged version. 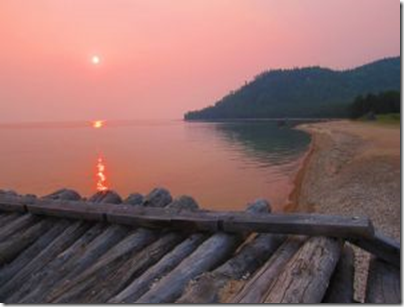 When you mention Siberia to most people they think of snow, ice and extreme cold – a remote place people were exiled to in the past as a punishment. Maybe they might mention a Siberian husky if they are au fait with the canine world.

But we experienced a beautiful natural landscape, inhabited by incredibly friendly people, and glorious summer weather that compelled us to take a swim in the crystal clear waters of Lake Baikal nearly every day.

I had travelled to Siberia, and Lake Baikal in particular, as part of the Leverhulme funded project ‘Exploring Russia’s Environmental History and Natural Resources‘ . This three-year project is the brainchild of Professor David Moon from the University of York.

By bringing together colleagues from the UK, Russia, the USA, Canada and Romania it aims to unveil a more realistic view of Russian environmental history and conservation than the predominately negative stereotype that is commonly perceived in the western world.

There were 16 people on our field trip, the second in a series to several key areas of Russia, with almost all of the others being environmental historians. I am a marine biologist, so what was I doing on a trip to Lake Baikal, which is pretty much as far from the sea as anywhere on Earth? Well to slightly misquote James Bond, "Where there is water a marine biologist is never on holiday."

The ecological principles that apply in marine and freshwater environments are very similar, so I had been asked to accompany the group to give my perspective on the state of fish stocks in the lake and to make suggestions for future management. In reality, I had the amazing opportunity to do most of the learning on the trip.

Lake Baikal is arguably the largest lake in the world, at least in terms of volume, due to both its large surface area and immense depth of over 1,600 metres. In fact it is estimated to hold over 20% of all the unfrozen freshwater in the world. Being formed due to a continental rift over 25 million years ago it is also the world’s oldest lake.

This combination of size, age and isolation has blended together to produce a unique environment, both geologically and biologically. Surrounded by high mountain ranges and with crystal clear waters it is stunningly beautiful. It is also incredibly biodiverse and many of species that occur there exist nowhere else in the world.

Along with the nerpas, the World’s only true freshwater seals, and possibly the cutest, over half of the 56 fish species present are also endemic. The lake also contains over 350 species of amphipod shrimps, most of them endemic and also gigantic in size (for amphipods!). Of its 2,500 known species, 75% are endemic – unknown anywhere else.

The lake’s fisheries centre on the omul, Coregonus migratorius, which is a member of the salmon family and another endemic species [3]. It is revered as a delicacy throughout Russia, and rightly so. We ate it on at least half a dozen occasions; each time prepared in a different way and each time delicious.

Annual commercial catches have amounted to over 10,000 tonnes per year in the past, which is a sizeable fishery in anybody’s eyes. However, the fishery for omul, along with the lakes other targeted species such as sturgeon, whitefish and grayling have a chequered and widely fluctuating history.

In fact things got so bad that in 1969 the entire commercial fleet was closed down until 1982. The declining fortunes of the lake’s fisheries have certainly been driven by overfishing to a certain extent, but environmental factors also play a large role [4].

Water level in the lake, controlled by both changes in precipitation but also hydroelectric dams, particularly on the Angara, the only river flowing out of the lake, has long been known to be a crucial factor. This affects the amount and quality of fish spawning habitat in the shallow waters around the lakes edge and in the deltas of inflowing rivers.

Likewise changes in water temperature affect both the survival of young fish and the behaviour of adults. When the summer temperatures are warmer than usual the omul swim deeper and therefore are more difficult to catch.

We travelled around Lake Baikal by a combination of train, road, boat and foot, from Irkutsk in the west, to Ulan-Ude in the east and then north and back via the Zabaikalsky National Park, Ushkanyi Islands and Olkhon Island. One of the real highlights of our trip was the opportunity to spend three days at the remote Barguzin nature reserve on the north-east side of the lake.

Barguzin is a Zapovednik, the oldest type of nature reserve in Russia, and is reserved primarily for scientific research. Established in 1916 it is now just shy of its centenary and covers almost 2,500 sq.km of rich mountainous landscape along with taiga forests, gurgling streams and part of the lake itself.

This joined up approach to conservation was well ahead of its time. The reserve was originally established to revitalise sable populations in the area, a species of marten which was highly prized for its ‘soft gold’ fur at the time.

Along with holding several workshops during our time at Barguzin, we hiked the forests, hills and shores of the lake and were regaled with tales of bears, who appear to be the main local inhabitants these days. We never actually saw a bear in the flesh, but we saw plenty of signs of their presence in the form of scat, bear pits and claw marks on trees.

If I have painted a picture of Lake Baikal as a unique and beautiful environment then I’ve done my job. But the future is far less rosy. The area is a climate change hotspot, warming up much faster than the global average.

The average temperature of the lake increased by 1.2C between 1946 and 2004 which has had dramatic effects on the plankton community and no doubt the rest of the aquatic ecosystem. On land the ice free season has increased in length by 16 days since the late 1800s and melting permafrost is changing land-atmosphere gas fluxes, damaging roads and infrastructure, and flooding the lake with excess nutrients.

Extreme weather conditions brought on by climate change are also wreaking havoc. The beautiful warm and dry weather and extraordinary sunsets we were blessed with on our trip were not entirely natural.

An usually warm and dry summer had produced the perfect conditions for forest fires which raged around us on most days, resulting in an omnipresent haze and destroying untold hectares of pristine forest.

These are still burning out of control in many areas as fire fighters struggle with limited resources and the inaccessibility of many areas. Things are only likely to get worse in future years.

Due to its outstanding natural scenery and biological diversity Lake Baikal was declared a World Heritage area in 1996, leading many to think its future would be secure. Even the infamous pulp and paper mill which pumped poisonous dioxins and other waste into the southern waters of the lake for nearly half a century was closed down in 2013.

Now a new threat looms: a giant dam in Mongolia

International NGOs started to move away and turn their attention to other areas, figuring the battle to protect the lake had been won. But World Heritage legislation has limited power in Russian law, and climate change is a global issue, which needs all of us to take action.

Now a new threat is emerging, the proposed construction of the Shuren dam on the Selenga River in Mongolia and an associated pipeline taking more water from one of its tributaries. The Selenga subsequently flows into Russia to supply Lake Baikal with almost half of its water.

The dam and pipeline would undoubtedly further decrease the already record low water level of Baikal and irretrievably damage the Selenga delta – a vital spawning and feeding area for the lake’s fish and birdlife.

Given the multitude of other threats already facing the incredible natural jewel that Baikal represents, I can only hope that the current campaign by the NGO Rivers without Boundaries, along with diplomatic pressure from Russia, will stop this potentially catastrophic project from going ahead.

Conference: The 9th International Conference ‘The Rivers of Siberia and the Far East’ was held on November 10-12, 2015 in Irkutsk City, Russia. The Conference was dedicated to river and lake conservation issues in Siberia and the Russian Far East as well as other regions, sharing domestic and international experience.

Bryce Stewart is a marine ecologist and fisheries biologist whose work has ranged from temperate estuaries to tropical coral reefs and the deep-sea, and a lecturer in the Environment Department, University of York.