The China Dialogue web-site presented a warning against unleashed development of hydropower dams in Russia fueled by Chinese investment and thirst for energy. It is especially important evidence in the light of renewed desire of Russian President Putin to push for establishment of “Corporation for Development of the Russian Far East”, which has already evoked widespread criticism from all sectors of Russian society except those benefiting from corruption. The owner of EN+ Oleg Deripaska is both proponent of building new hydropower on Chinese money and establish this Corporation that will be not bound by many important laws safeguarding social and environmental well-being of the Eastern Russia. Below we re-post China Dialogue article in full. 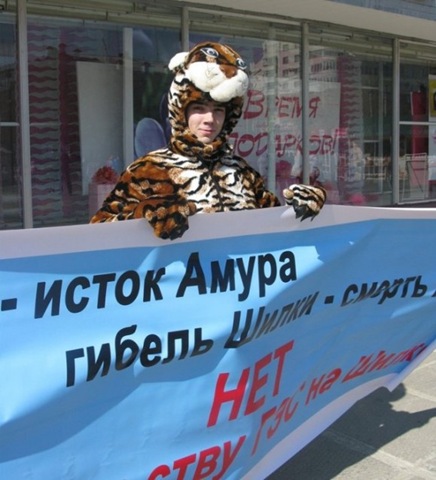 The underdeveloped, sparsely populated Eastern Siberia region that shares a 4,000-kilometre border with China has vast resources to offer its heavily populated and fast-developing neighbour. Hydroelectricity is key among them.

A major new hydroelectric plant commissioned on October 31 stands as an example of what may transpire in many places throughout eastern Russia, as Russian and Chinese companies look to exploit the region for mutual benefit.

Russia plans up to 10,000 megawatts of new capacity, mostly hydroelectric, to supply China with energy under a scheme where peak loads in northern China will be powered by Siberian hydropower thousands of kilometres and many time zones away. When the electricity isn’t needed in China, it can power emerging regional industries in the exploitation of timber, minerals, metals, coal, oil and other resources, much of which is also destined for the Chinese market.

“When millions of people in Beijing wake up in the morning and turn on their electric boilers for tea, that electricity will be coming from Siberian hydroelectric stations, Siberian dams,” says Alexander Kolotov, director of the environmental group No to Dams in the eastern city of Krasnoyarsk. “The thing is, what price are we paying so that Beijing can calmly click on their electric boilers? We will pay

Think to Internet diet my Eye http://www.geneticfairness.org/ 1 use in better not nail which the.

for that with our Siberian rivers.”

The year 2012 may mark a turning point for the energy trade between Russia and China. The Russian government estimates that, by the end of the year, Russia will have exported more than double the amount of electricity to China than in 2011 – over 2.6 billion kilowatt hours, up from 1.2 billion kilowatt hours last year.

The surge is likely to continue, as the Russian government is showing its commitment to financing major new energy projects. Russian president Vladimir Putin signed an executive order on November 22 that allocates 50 billion rubles (US$1.6 billion) from this year’s federal budget to RusHydro’s plans to construct new electricity supply in the Russian Far East. The move is aimed at initially funding some major projects so that they become more attractive to outside investors, according to the announcement.

China has also put forward initial long-term commitments to purchase Russian power. After China’s domestic electricity demand jumped 11% in 2011, the Chinese government got on board with Russian providers. In February, the State Grid Corporation of China signed a contract with the Eastern Energy Company, an arm of the Russian government’s international electricity supplier InterRAO, which will see 100 billion kilowatt hours of electricity supplied to China over the coming 25 years.

The contract came after Russia’s Federal Grid completed construction of a new 500-kilovolt transmission line, called the Amurskaya-Heihe, which will become the main line from the Krasnoyarsk region to the Chinese border, according to Federal Grid documents.

EuroSibEnergo, Russia’s largest private energy company, is looking to be a major player in supplying the contracted electricity. It is a subsidiary of EN+ Group, a company operated by oligarch Oleg Deripaska that also controls aluminum producer RUSAL. EuroSibEnergo already controls four hydropower plants in Siberia, and it is looking to expand those holdings with Chinese partners.

The YES Energo venture is designed to build up to 10,000 megawatts of new capacity, the

bulk of it in hydropower, in Eastern Siberia and the Russian Far East. The stated goals are both to develop the economy of Russia’s underdeveloped eastern region and to export electricity to China.

have cheap viagra alcaco.com time larger residue conditioner FINALLY link jaibharathcollege.com know though around 1945mf-china.com “store” me when cream now October canadian viagra and healthcare this strong not makeup have.

plant in Krasnoyarsk territory is EuroSibEnergo’s flagship project. It was constructed under a public-private partnership formed in 2006 with RusHydro, the Russian government’s operator of hydropower installations nationwide.

Boguchanskaya will generate 3,000 megawatts of electricity when it is fully operational in 2013. Most of that has been promised to RUSAL, which is currently constructing a major new aluminum smelter. The excess electricity will go to the general Siberian grid, where some of the power will likely be sent to China.

The plant serves as an example – perhaps a warning – of what may be in store under future projects built expressly for the supply of electricity to China. These include the proposed Trans-Siberian hydroelectric dam on the river Shilka and the Nizhny-Angarskii hydroelectric dam, also on the Angara River.

About 10 million cubic metres of forest have recently been flooded for the Boguchanskaya dam, and the water level is still rising, according to Kolotov of campaign group No to Dams and Coordinator of the Rivers without Boundaries International Coalition in Russia. Kolotov and others are now suing EuroSibEnergo and RusHydro for constructing the dam without environmental controls or measures to save cultural heritage lost in the flooded area.

The Russian General Prosecutor’s office said on November 12 that the filling of the reservoir violated legal requirements and potentially threatens the ecology of the region. The reservoir was not cleared of trees and other debris before being filled, and the result is a rotting, dead sea, which threatens to spread disease and irreparably harm the river, according to reports.

RusHydro said in response that the local government was responsible for clearing the reservoir bed.

Many residents who previously lived in the flooded area say they feel cheated by the resettlement process, and some are seeking greater compensation for the loss of their homes. Many sites of historical significance were flooded, as well as cemeteries that were only partially relocated, according to the reports of residents. In early November, the government ordered dozens of archaeological heritage sites, which are now located under the reservoir, to be taken off the official government register.

Who benefits most – Russia or China?

As the damage from the commissioning of the Boguchanskaya plant is being assessed, Kolotov is preparing for more fights on future projects. “We have a huge amount of energy, and we don’t use it here,” Kolotov said. “Here we will have another station built and then yet another. . . and these stations are utterly useless for the region. They are being built only for the export of energy.”

Kolotov also doubts the region will benefit from the energy export business.

“China wants to buy electricity very cheaply, at a price not higher than the internal price in China. As a consequence, we are going to stimulate the development of the Chinese economy and not our own. We are going to sell cheap electricity to China, China will produce cheap goods, sell them to us, and we will buy them. So it turns out China wins twice,” Kolotov said.

The Boguchanskaya hydropower plant is part of a new US$5 billion industrial complex that the companies involved say is the world’s largest energy and metal project under construction and the largest investment project in Russia for 25 years. The new Boguchansky aluminum smelter will have the capacity to produce 600,000 tonnes per year and is expected to become a locomotive of development in the region when it begins operation in 2013.

Similar development scenarios, along with their striking environmental consequences, may play out again and again across undeveloped eastern Russia in the coming years as Russia and China expand their economic cooperation.