Interesting media project “My River is Yours” has been posted on the web this week.It is dedicated to local perceptions of transboundary river management –subject largely neglected in North Eurasia. Some RwB experts took part in discussions: 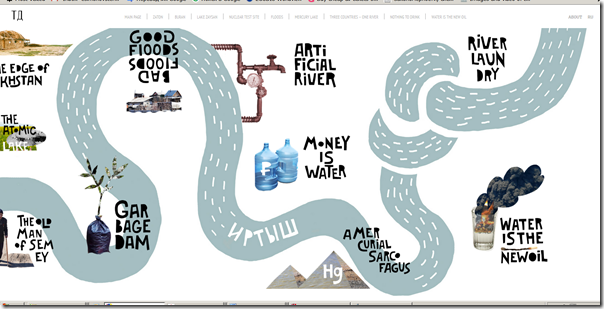 “China has different water-management relations along the border with each one of the countries it shares water with. This ranges from a highly developed, although poorly executed system of agreements with the Russian Federation to a total mess in Southeast Asia with neighbors like Myanmar, where there are no agreements at all,” says environmental expert Evgeny Simonov from Rivers Without Boundaries. “In 2013 in Kazakhstan, China tried to partially resolve the situation by signing an agreement on the quality of water, leaving the question of quantity untouched until they construct all the canals they need. Nazarbayev was totally right to say “no” to them and suggest coming up with an agreement, since it was threatening safety and security. It was the right thing to do. During the same years (may be a little earlier), China refused to cooperate with Russia and Kazakhstan in making a trilateral agreement. By the way, today this can change, taking into account the new rules of the game and the desire of China to unite everyone along the Silk Road,” continues Simonov.

Experts from the Barnaul Institute of Water Problems consider that only trilateral negotiations can save the situation with the Irtysh. However, China is ready to discuss the issues of the Ob-Irtysh basin only with its immediate neighbor on the river – Kazakhstan. Since 2001, the countries have tried to agree, but as of today, they have only managed to establish information exchange on the volume and quality of water.

The main indication of global warming, the melting glaciers in the Altai fuel the debate. Rivers flowing into Lake Zaysan and to the Irtysh are becoming smaller and local residents note, “We used to bathe here with water levels reaching our breast and now we can walk across the river that is knee-deep.” Omsk environmental specialist Sergey Kostarev is worried that in the worst case scenario, soon the Irtysh in the Omsk region will become completely shallow drying out entirely once in a hundred years. However, these are only forecasts that will come true only in a worst case scenario.

“There is a growing feeling that oil reserves will soon be exhausted, oil being a finite source of subsistence. Thus, water looks like another interesting object of human parasitism,” says Evgeny Simonov, an ecologist and international coordinator of the Rivers Without Boundaries Coalition, raising a new topic of speculation on water. He shows multi-page correspondence among businessmen and officials of Kazakhstan and Russia, where they discussed controversial projects proposing to divert Siberian rivers towards China and Kazakhstan.

Talks of diverting rivers is still alive. It may seem an absurd thing of the past, an anti-ecological initiative, and a dubious story, but there are still talks of diverting the flow of some other Siberian rivers into the Irtysh. Despite common sense as well as desperate protests from most ecologists, some officials have continuously proposed ideas to improve the situation on the Irtysh. In their opinion, radical measures must be taken.

If the rivers are being diverted, than someone needs it. It is simple: very often companies implementing such large-scale hydroengineering projects are private organizations sometimes affiliated with the state and every project of the kind brings considerable profit. In order to stay afloat and make ends meet, organizations dealing with saving water resources try to keep up the story of imminent doomsday within a few decades if no measures are taken, by which they significantly exaggerate the scale of the tragedy.

“Indeed, the Irtysh river has problems with the quality and level of water, but artificial diversion of the river flow will lead to an even larger ecological disaster. A river is a living organism with its biorhythm, flora and fauna, and even the slightest of changes will result in problems of different scale and nature – from extinction of fish and plant species to even larger shallowing,” says Sergey Kostarev, an ecologist from Omsk.