There is a new evidence the IFC does not apply its own standards properly and this has implications for any hydropower projects they support. In a recent IFC CAO Ombudsman newsletter I have found investigation report on Lengarica Hydro in Albania that raises multiple concerns.

Organic Agriculture Association Executive director Lavdosh Ferruni  in 2015 filed a compliant insisting that IFC financial support is in violation of many environmental socio-economical and country legal  rights and it should withdraw from this project, that ruined both natural ecosystem and prospects for river-related ecotourism..

In a three year investigation that followed "CAO has given particular attention to the following issues":

a) assessment of Lengarica HPP impacts on endangered and endemic species;

Despite the fact that ESIA Report from 2011 is still not publicly available and that "endangered species" allegedly  mentioned there   largely remain unspecified and not studied  the CAO concluded that "IFC conducted adequate supervision" and needs not to proceed.

Despite the fact that Lengarica river ecosystem is really unique due to rare feature -thermal springs below the dam and that is has documented occurrences of critically endangered European eel in CAO’s opinion it does not merit to be recognized as "critical habitat".

b) No assessment of cumulative impacts on biodiversity;

Despite several dams being present in the basin the CAO waived requirement for IFC to conduct necessary basin-wide cumulative assessment for Legarica river and adjacent stretch of Vjosa River.

c) Methodology used to determine the minimum environmental flow required for the Lengarica HPP contradicts the IFC’s own guidelines.

CAO concluded that "IFC conducted adequate supervision" and since two years after construction there is still fish in the river "provision for minimal environmental flow should stay the same as prescribed". 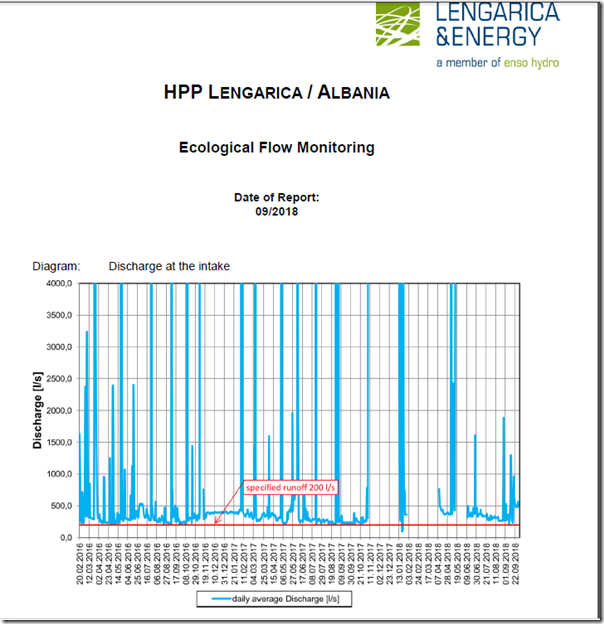 Please see above a chart from monitoring report on "environmental flow requirements compliance" by the ENSO company. To start with it lacks records from Dec 2017 to April 2018. More importantly it clearly shows that "minimal EF requirements"  do not address rampant hydro-peaking that is deadly for all aquatic creatures. It is as far from natural flow regime as one could imagine. The IFC clients are flushing Lengarica river as if it is a toilet and CAO Ombudsman is quite happy with it?

Meanwhile the WB Group issued detailed guidelines which all say that "minimal EF requirements" are extremely outdated bad practice and should be replaced with much more robust requirements mimicking natural flow regime. The latest and the best manual is issued by IFC in early 2018 and referenced by CAO in  their report(!) Here is our take on those IFC guidelines https://www.transrivers.org/2018/2177/

The least to be expected from the CAO Ombudsman would be requesting the IFC,  its client ENSO company and Albanian Water Authorities to undertake a valid study and develop robust environmental flow regime on the basin-wide scale (another HPP upstream may be even more damaging). Instead they slyly refer that "monitoring shows that requirements are being met".

Fortunately in the same report the CAO Ombudsman  identified three other "unresolved" issues and still has to conduct monitoring for at least a  year (till July 2019). We hope that Albanian NGOs issue an appeal calling on CAO to revise its illegitimate judgments on environmental flows and critical habitats and prescribe that the IFC undertakes corrective actions.

This is important not just for Albania, but for all future performance of the WB Group in hydropower. We should not let them not to follow their own guidelines.