As Mongolian Government is steering the discussion about the proposed dams in Lake Baikal – Selenge River basin from energy security to national water crisis it is important for civil society groups and independent researchers to collect and use for good available information on effective water management solutions and efficient water use technologies relevant to Mongolia. 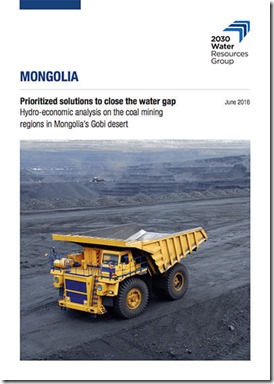 Judging from contents both reports were developed by hard-core engineers and economists with little interests and expertise in environmental, social or policy aspects. For example, impacts of water infrastructure projects on biodiversity and habitats they somehow measure through "air-pollution effects on flora and fauna". Watershed-management approaches to managing water availability and evaluation of ecosystem services is completely omitted in both reports, although a decade earlier it was a subject of detailed study in Tuul River basin conducted with World Bank support.

Without any hesitation the authors take for granted enormous coal industry plans as inscribed on the wish-list of Mongolian Government and are trying to answer only one very specific question: What are most cost-effective and reliable means of water-supply for that planned disaster. Because no other term but "disaster" can be used for such projects as the 5280 MW coal-thermal power station at Shivee Ovoo planned by China State Grid Corporation for electricity exports back to its homeland.

However outcomes of this narrow-focused study may have great practical value – they show commercial availability of a wide spectrum of technologies for more efficient water use, which can reduce or fully remove the need for major water infrastructure (namely large dams and pipelines) encroaching on rivers of Mongolia. The study on coal shows that even without proper consideration of environmental and social costs, projects like Orkhon-Gobi Reservoir and Water Transfer Complex make no sense.

The reason is simple: the total costs of constructing the Orkhon-Gobi water transfer could be up to USD 1300 million and its exploitation costs are estimated at 65 million USD/year. This amounts to expenditure 212 million USD/ year for project lifetime, while the holistic hydro-economic analysis for Tavan Tolgoi region, suggests that the water supply demand gap in the high scenario can be closed at an incremental cost of 22 million USD/ year when compared to the baseline technology alternatives.

So Orkhon Gobi (and its twin Kherlen Gobi Project) is already 7-10 times more expensive "solution" from investors’ perspective. If we square in societal costs associated with environmental damage, social impacts, resettlement, as well as foregone broader development alternatives, the chances of those water-supply mammoths to be built for now look extremely non-promising. 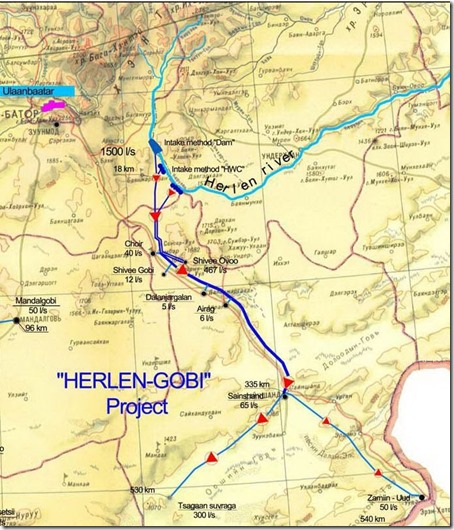 Question MMJ : There was great optimism about projects such as the use of water from the Kherlen and the Orkhon rivers,  but now it seems even these would not be able to meet the Gobi region’s needs. Are more surface water projects being considered?

Answer by Dorjsuren: Climate change has affected both how often and how much it rains. We no longer have light but continuous rain for days at a stretch. Instead, there is heavy rain for briefer periods and floods follow. We can collect and store the flood water from these two rivers, but much bigger facilities will be required to do this. Also, rivers are carrying less water. So before we take up a surface water project, we have to make a thorough and detailed feasibility study. Surface water will become more important in the 2040s. Bringing technologies to all dry regions to minimize water consumption could be our best contribution to sustainable water resources management.

So, can we finally agree on a Water Truce for next 25 years and leave our fragile rivers in peace till the 2040s?