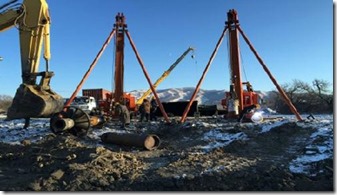 People of Buryat villages gathered 60days ago in Kabansk and requested from WB, Mongolian and Chinese agencies not to approve and fund construction of any of three large dams planned in Baikal Lake Basin. They argue that dams may severely threaten biodiversity of unique  World Heritage Site and livelihoods of local people. Two dams presently undergo feasibility study sponsored by the WB, while the third one is already under preparatory construction works by Chinese  Gezhouba company. The Minster Safyanov bluntly stated and national-level expert meeting at the Ministry of natural resources of Russia, that local people voted for "zero" dam scenario and want it to be seriously considered by all responsible agencies.
Citizens of Buryatia are most worried by information spread by Mongolia officials[1] about securing a 1 billion USD loan, mostly from China EXIM Bank, to support development of controversial Egiin Gol Hydropower Project located on the Eg river 9 kilometers upstream from the point where it empties into Selenge River  – main water source of Lake Baikal World Heritage site in Russia.
The Lake is not only the largest freshwater body  in the world, but also hosts more than 2500 biological species, 70% of them found nowhere else on the planet – unique biodiversity not found anywhere else.
Ivan Blokov campaign director in Greenpeace Russia said that he still does not understand why his organization having best expertise in Lake Baikal national heritage has not been invited to take part in national-level expert meeting at the Ministry of Natural Resources of Russia. He confirmed that construction of hydropower reservoirs in Baikal Lake Basin without proper trans-boundary impact assessments and internationally agreed safeguard measures presents serious threat to unique ecosystems and constitutes a violation of specific articles of at least three international conventions and several bilateral treaties. Therefore any construction should be postponed until requirements of conventions and treaties are fulfilled and reliable internationally agreed safeguards are in place. Blokov is surprised that China’s state companies and banks could be  involved in such project that clearly contradicts to policy guidance on Green Silk Road  that defines nowadays China’s cooperation with neighbors.