China has a bad record when it comes to water cooperation. It was one of only three countries (along with Turkey and Burundi) to vote against the UN Watercourses Convention – the only global agreement on the use of international watercourses – when it was adopted in 1997. China controls the water flowing into neighbouring countries, as it is the upstream country for most of Asia’s major rivers. Yet China has not signed any comprehensive river treaty that regulates the distribution of water. It has also been reluctant to set up, or join, existing inter-state river commissions. 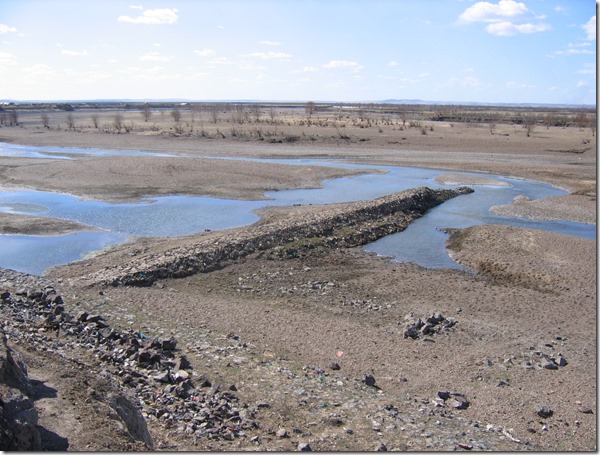 Above all, in recent years China has received blame for not disclosing information about its dam-building activities and possible river diversion plans to downstream neighbours along several of its transboundary rivers. This has been especially true for its southern rivers, such as the Mekong, which China shares with Southeast Asian countries, and the Brahmaputra, which flows from Tibet into India and Bangladesh.
In Central Asia, China’s international hydro-politics primarily involve Kazakhstan. China’s vast Xinjiang Uighur Autonomous Region and Kazakhstan not only share a 1,700-kilometre long border, but also 20 rivers, among which the Irtysh and the Ili are the largest. The Irtysh River originates in China’s Altai mountains, crosses into Kazakhstan, and finally flows into Russia where it joins the Ob River and spill out into the Arctic Ocean. The Ili River also rises in Xinjiang and later flows into Kazakhstan, where it terminates in Lake Balkhash, providing more than 50% of the lake’s fresh water. Both rivers are sources of water for Kazakhstan.
Unlike concerns along the Mekong and Brahmaputra, Chinese construction of large dams for hydropower generation is not the problem in the Irtysh and Ili basins. Rather, downstream Kazakhstan has worried about China’s increasing water use in a region where the resource is scarce. Since the late 1980s China has built canals to divert water away from the mainstream. What’s more, in October 2004 China’s then ambassador to Kazakhstan confirmed that his country was counting on consuming as much as 40% of the Irtysh’s flow.

China uses up to 70% of the Ili, according to some estimates. These figures exceed the percentage with which China lies in the two river basins.

The reasons for China’s enormous water withdrawals need to be understood in light of China’s 2003 White Paper on Xinjiang, which made a case for the expansion of cotton and energy industries as part of the ongoing ‘Develop the West’ campaign. This has resulted in an unsustainable growth in water use. Cotton is a highly water-intensive crop, yet now takes up about half of Xinjiang’s arable land; Beijing regards textile exports to be of strategic interest. Xinjiang is also China’s leading domestic oil producer. To guarantee the future development of oil fields, water diversion schemes for the Irtysh and the Ili are considered inevitable. On top of this, continuing large-scale population migration into Xinjiang from other provinces will also intensify the demand for water.
For downstream Kazakhstan, China’s huge water withdrawals are likely to precipitate several adverse effects. Rice production, for example, has already decreased. Hydropower generation and navigability could also be affected. The Irtysh is also the main source of fresh water for around 15 million people, mostly living in Kazakhstan’s bigger northeastern cities, including the capital Astana. Water shortages could threaten urban and industrial development there. Environmentalists have warned that Lake Balkhash could become a desert, like the Aral Sea.

A new approach to water diplomacy?

Yet despite China’s poor record of hydro-political cooperation, there has been a longstanding partnership between China and Kazakhstan. What is surprising, however, is the degree of cooperation China has been willing to accept vis-?-vis this particular downstream neighbour. In 2001, China agreed to set up a joint river commission with Kazakhstan. While the scope of activities of the commission has remained narrow, focusing on monitoring and research, the establishment of a commission is an unprecedented step for China.
More notably, over the last couple of years both countries have taken further steps to reach a new stage of common water governance. In early 2011, China finalised an agreement on water quality protection along shared rivers with Kazakhstan. Beijing and Astana then also decided to move ahead with plans to regulate the distribution of shared water. Intentions to implement these plans were re-emphasised in June 2012. Both steps, again, are unprecedented, in particular as they involve transboundary rivers where China is the upstream country.
In April 2011, China and Kazakhstan launched the long-awaited China-Kazakhstan Friendship Joint Water Diversion Project on the Khorgos River, a 150-kilmetre long tributary of the Ili and a border river between both countries. Under the agreement, each side will be allotted 50% of the water diverted, and the goal of the project is to improve irrigation, secure water supply for the ecosystem, and moderate flood damage, especially in Khorgos Port and the China-Kazakhstan Trade Cooperation Zone. While sharing water along a border river is not the same as along a transboundary river, this is arguably a sign that progress on bilateral water issues is possible with Beijing.

However, when one examines the likely reasons for China’s cooperative record with Kazakhstan, it appears unlikely that these actions will be repeated along its southern transboundary rivers any time soon.
Hydro-politics is only one small part of a country’s foreign policy and therefore frequently influenced by other objectives. Kazakhstan is a crucial partner for China to ensure border security in its fight against the so-called ‘Three Evils’ of separatism, extremism and terrorism (both are members of the Shanghai Cooperation Organisation, an international organisation that aims to promote ‘peace, security and stability in the region’).
Additionally, Kazakhstan is a major exporter of oil to China as well as a transit country for natural gas from Turkmenistan – both vital assets for China’s energy security and continued economic growth. Such qualities are not found among China’s southern neighbours.
It is also important to differentiate between water diversions and dam-building. The former are unfair because downstream countries are deprived of water; the latter, however, offer no reason for China to justify itself since the same amount of water continues to flow downstream.
Finally, it is important not to ignore the limitations to Sino-Kazakh hydro-political cooperation. Critically, this cooperation is strictly bilateral –unlike what is needed in the Mekong, for example. Besides, Beijing has not granted Astana any rights to veto unilateral actions on Chinese parts of the rivers. Therefore, while the Central Asia case is more positive than what we have seen in the Mekong or Brahmaputra so far, we should not regard this as a promising trend in China’s approach to hydro-politics.