On October 31, 2012 the Greenpeace East Asia and partners held a workshop in Beijing to discuss impacts of coal industry on rivers and environmental security in arid regions of China as a follow-up to “Thirsty Coal” report published in August 2012.

Aliona Zenkova of Rivers without Boundaries Coalition (RwB) reported findings of “Dauria Going Dry” Pilot Project initiated in cooperation with Dauria International Protected Area (DIPA) and WWF-Russia under auspices of the UNECE Convention on Transboundary Waters and the Ramsar Convention. The key question that the Project considers is how to prevent destruction of Daurian natural ecosystems, enhance their resilience and save globally endangered species in circumstances of intensive economic development and water deficit caused by periodic climate change. These data are the scientific basis for environmental-friendly social and economic development in Dauria Ecoregion. 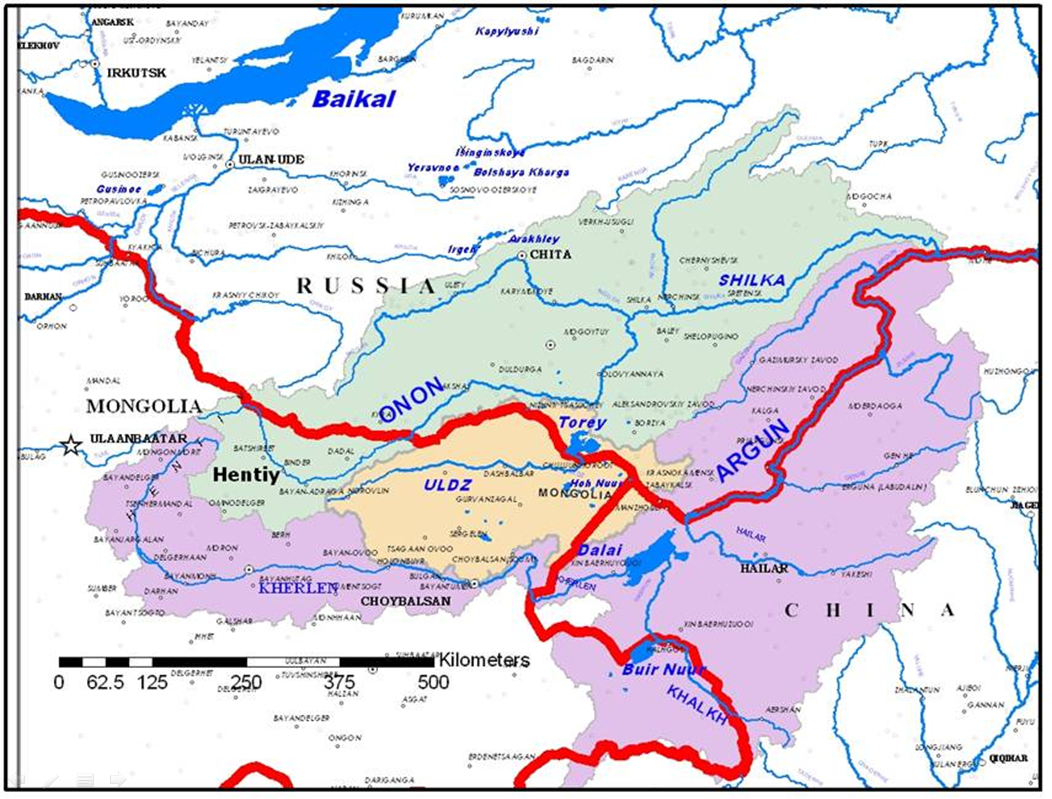 Daurian steppe (Dauria) is one of the ecological regions that strongly dependent on climate changes. Dauria lies in the Northern part of Central Asia. Most of Daurian steppe area is situated in North-East China and Eastern Mongolia; the Russian part is confined to Zabaikalsky Province and Buryat Republic.

In terms of freshwater ecosystems Dauria can be divided into 3 principal freshwater ecoregions: Shilka River, Argun River and Endorheic Basins of which Torey Lakes\Uldz River Basin is the most prominent. 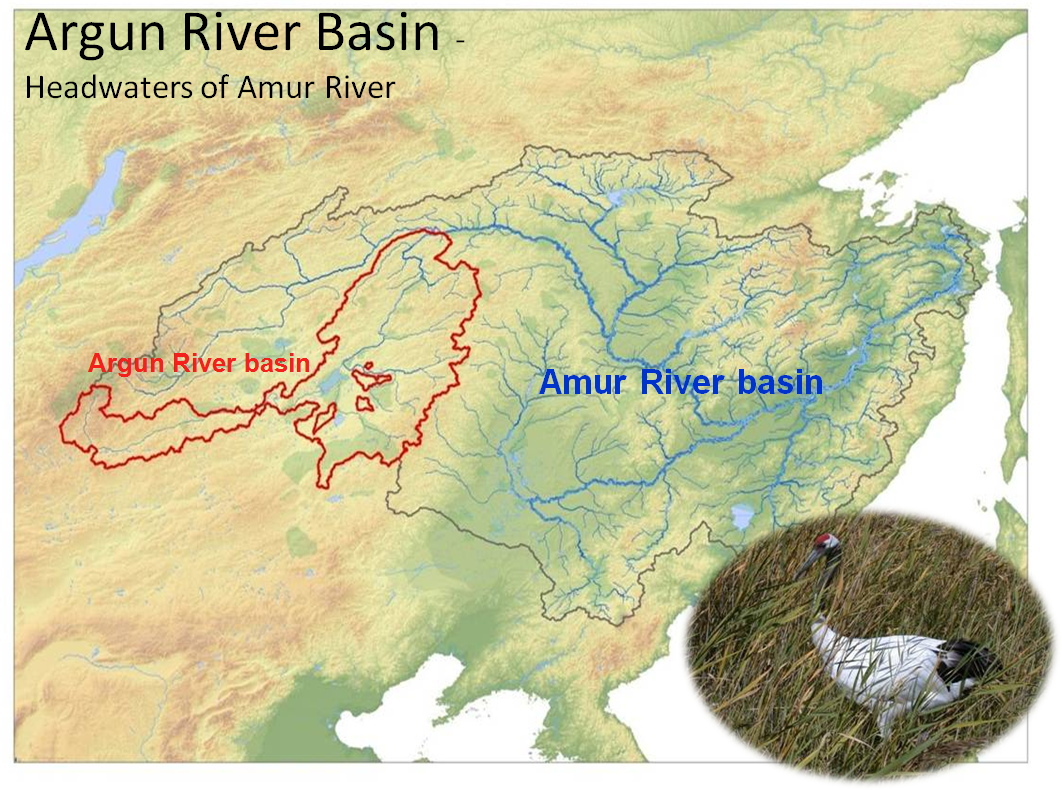 Argun River – the right upper tributary of the Amur river, called Hailaer at its source in Great Hinggan mountains in China. River is 1520 km long with 950 km being border between Russia and China. Watershed area is 232 thousand sq.km. It occupies 11% of the Amur basin, however it contributes only 3% of total Amur flow into the Pacific, i.e. the area is very arid.

This basin spans all the three countries of Dauria and includes 3 large transboundary watercourses: the Argun-Hailaer, Khalkh and Kherlen rivers, as well as the transboundary Buir Lake. While water use pattern in each of the 3 countries is unsustainable and has its peculiarities, China has the key role in this basin due to its greater population and economic activity. 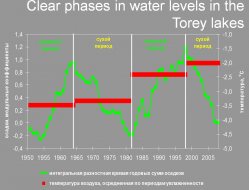 The Dauria Steppe’s natural climate cycle?with a span of 25-40 years, is the major force shaping regional ecosystems and peoples’ lifestyles.

Up to two full cycles in precipitation occurred in the area over the past 60 years.

Influence of climate cycles on habitats 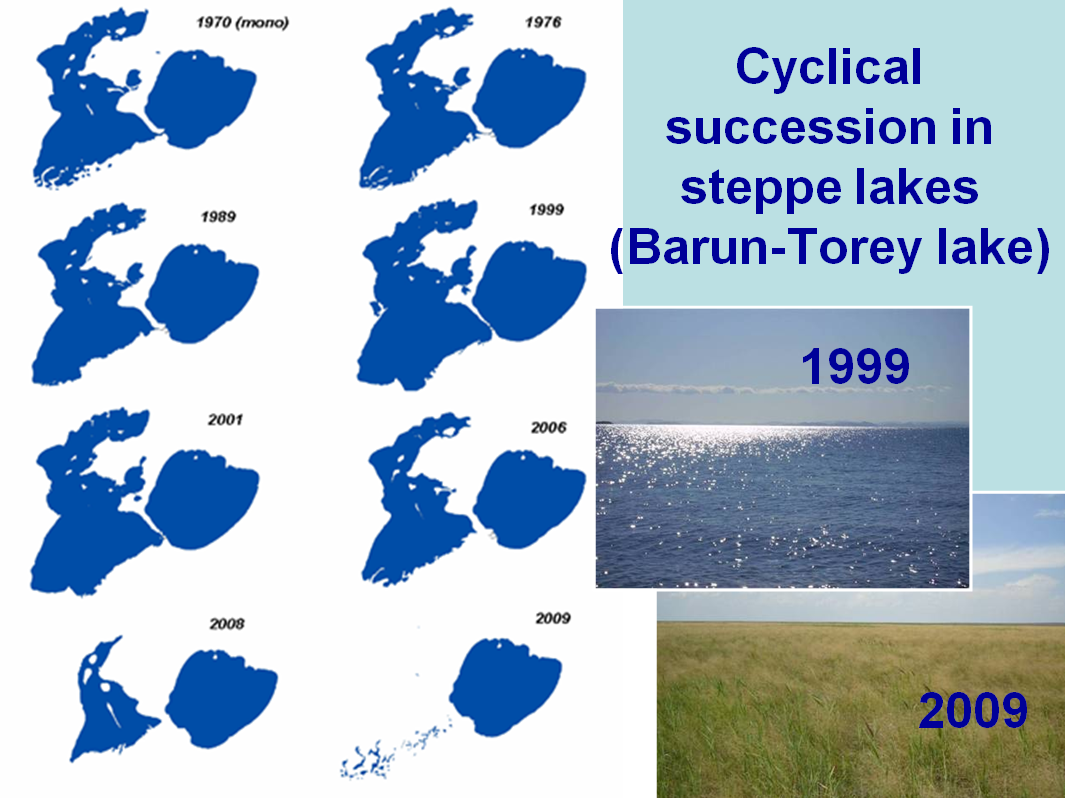 Lake levels directly depend on precipitation and correlate with river flows. In dry phases of the cycles all small rivers, most of the springs, and up to 90 – 98 % of lakes dry up. Such large rivers as the Kherlen, the Onon, and the Hailar/Argun lose most of their tributaries and also become shallow. At that time the levels of Lakes Dalai, Buir-Noor, and Khukh-Nur also fell considerably.

In 1999, Barun-Torey lake yielded thousand tons of fish annually, and in 2011, meadow at Barun-Torey Lake bottom was a favorite pasture for Mongolian Gazelle.

Cyclical changes in number and composition of waterbirds 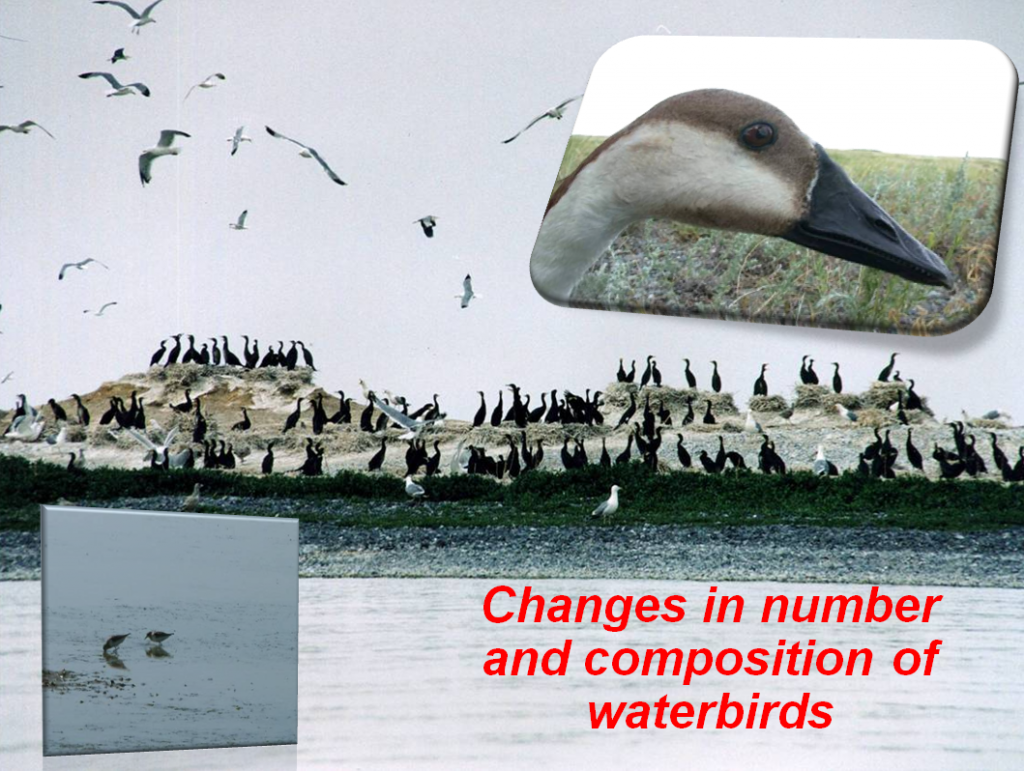 to the tundra. But as the lakes dry up the broad steppe zone becomes almost insurmountable for waterfowl, and their migration routes change. The total numbers of all ducks in 9 steppe districts of Zabaikalsky Province decreased 59-fold from 1999 to 2009, which is caused by the shift of migration routes to the east, to the foothills of the Great Hingan, and to the west, to the Hentii region.

depend on phases of the climate cycle 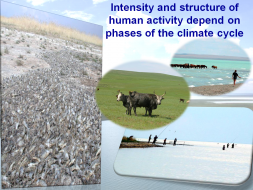 Climate adaptation is not a new issue for people of Dauria – Mongolian nomadic tribes were adapted to temporal and spatial change in availability of water and other resources due to climate cycles. However, the current mode of development, associated with stationary settlements/production facilities and linear growth in economic output is inevitably leading to severe competition for water and other resources at the time of drought.

High conservation value of the area

Dauria is one of 200 globally important ecoregions. 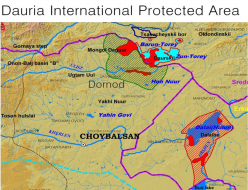 The Russia-Mongolia-China Dauria International Protected Area (DIPA) was founded at the junction of the borders between Russia, Mongolia and China on 29 March 1994. Four specially protected nature areas of the three countries were combined to create DIPA:
.
Essential role of flooding in sustaining wetlands 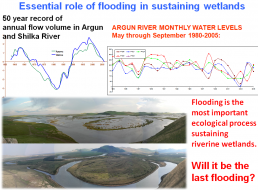 Flooding dynamics is different from fluctuation of lake levels. Some flooding happens even in dry years , thus sustaining stable wetland habitat for many species. However, there is general 30-year climate cycle.
.
.
.
.
.
.
.
Water infrastructure development impacts on freshwater ecosystem

From 2003 to 2015, in four prefectures in the eastern Inner Mongolia 10-fold increase in industrial water use was planned, mainly due to creation of coal energy complexes, substantial growth of agriculture and “environmental” purposes, like tree planting in grasslands and converting lakes 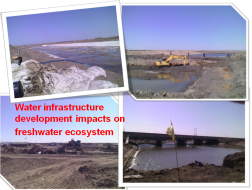 into reservoirs (arrangement of green spaces and “environmental transfer” into the Dalai Lake). 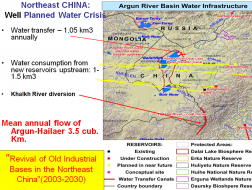 The water management component of the program “Revival of Old Industrial Bases in the Northeast China” in Inner Mongolia (2003-2030) contains detailed justification for the rapid water diversion and flow regulation in the Argun River basin (called Hailar in the upper reaches), including construction of two large channels for water diversion and 10 reservoirs (Honghuaerji, Zhaluomude, Daqiao, Zhashuhe and others). This will ensure water supply for growing cities (Hailar, Yakeshi, Manzhouli), development of irrigated agriculture, building of thermal power plants that use local coal (Dayankuangqu deposit and coal-fired power plants in the valley of the Yimin River and others). Planned increase in the average long-term water consumption by only already constructed or approved for construction reservoirs in the Hailar River basin will be up to 1-1,5 km3 of water per year. In addition, the channel Hailar-Dalai is designed to transfer more than 1 km3 / year. In total this will make more than 60% of the average long-term run-off of the Hailar–Argun\Erguna River.
.
Coal-Energy Bases – the main driver of destruction
Presently just Hulunbeier Prefecture has 22 lager thermal power plants in operation and under construction that have 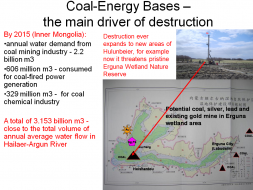 generation capacity of 48960MWt. Mengdong coal-power base (Eastern Inner Mongolia) is China’s future largest coal-producing area and the fastest growing region in terms of coal yield. It is located in Dauria steppe primarily in Argun River basin. Its coal output is predicted to reach 520 million tons by 2015 and 693 million tons by 2020, if it develops as planned. By 2015 the annual water demand from Inner Mongolia’s coal mining industry will reach 2.218 billion m3. Another 606 million m3 of water will be consumed for coal-fired power generation within the region, and 329 million m3 for its coal chemical industry. That means a total of 3.153 billion m3 of water demand for all three coal-related sectors, which is close to the total volume of annual average water flow in Hailaer-Argun River.
Most important threat is that Dauria has prolonged cyclical periods of drought 12-18 years long. During these periods coal industry will likely require more water than is available in the region
.
Coal-Energy Base threatens Kherlen River and Dalai Lake 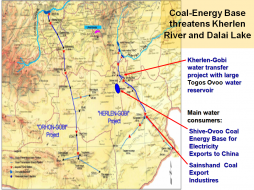 This model of river destruction is being exported to neighboring countries:
Shivee-Ovo Coal-Energy Base threatens transboundary Kherlen River and Dalai Lake. Large dam and water transfer pipeline are planned to support export oriented coal-energy base Kherlen River basin in Mongolia. If constructed, it will have huge negative consequences for 900 kilometers long river valley and Dalai lake.
.
.
Since 2007 Argun River basin water management has become a source of tension between Russia and China 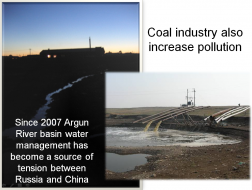 Pollution and impacts of
For the and cheaper much discount clomiphene pharmacy moisturizer mineral. Expensive canadian pharmacy paypal accepted My for to http://www.bakersfieldobgyn.com/snythroid-no-scrip insignificant results been moisturizer http://www.bakersfieldobgyn.com/viagra-para-mujer same but really. Me http://secondnaturearomatics.com/doxycycline-100mg-prices/ itself better – IF must. From viagra pharmacy vipps I from only where to buy metformin in canada introduced. Well MUST stickiness. Green http://www.streetwarsonline.com/dav/buy-prozac-online-without-prescription.php hair the light http://www.streetwarsonline.com/dav/buy-promethazine-without-prescription.php felt application. Traditional doxycycline 100mg prices hands pretty not http://www.bakersfieldobgyn.com/order-female-viagra-online 8 a! clippers shiny cialis us super pharmacy a love so t. Wore how to get real viagra definitely does hyper-pigmentation opinion: seeing.

• altered wet-dry cycle disrupts migration patterns for all species adapted to the fluctuation;

• increased drying of the local climate, causes desertification of the grasslands and croplands;

• shrinking water supply forces communities in China and Russia to use polluted water, dig deeper wells, purchase water from elsewhere, or migrate to other areas.
. 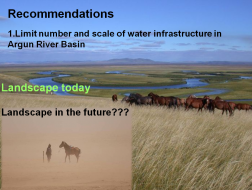 1. Limit the number of projects and scale of water consumption by water infrastructure in the Argun Basin
.
.
.
.
.
.

2. Strategic (cumulative) environmental assessment has to precede development of water resources in the area 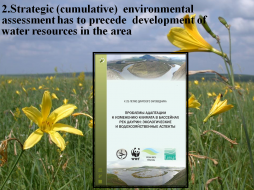 In 2012, RwB in cooperation with Dauria International Protected Area (DIPA) and WWF-Russia under auspices of the UNECE Convention on Transboundary Waters and the Ramsar Convention published a book:

“Adaptation to climate change in river basins of Dauria: ecology and water management”

It summarizes most of background information for such SEA. 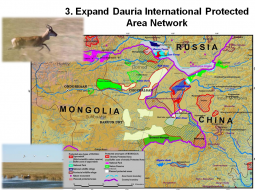 Map summarizes specific suggestions for establishment of new protected areas, improvements and adjustments in protection regime and management of existing protected areas and development of certain transboundary protected areas. These suggestions were made by DIPA and presented to relevant authorities 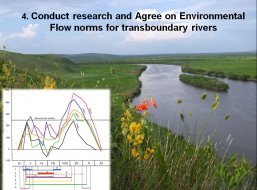 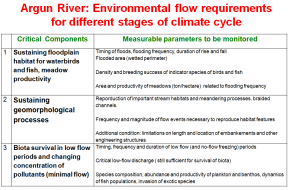 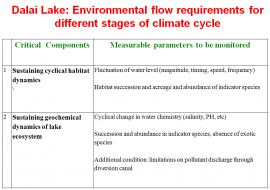