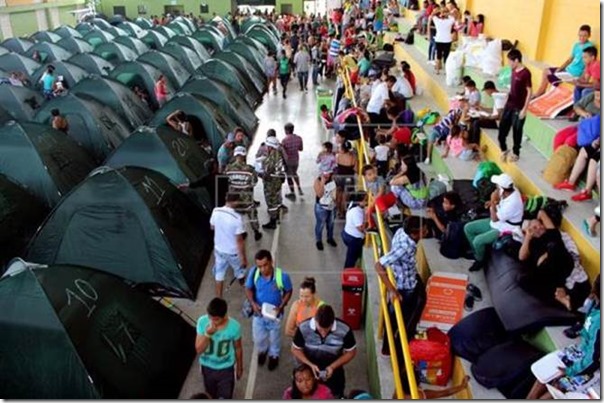 Degradation of UN institutions catering to special interest groups has reached a new height. The United Nations Department of Economic and Social Affairs (UN DESA) in March 2018 started a partnership “Sustainable Water and Energy Solutions” with the Itaipu Binacional Hydropower (Brazil-Paraguay) company which holds the world record of annual energy production for a hydroelectric plant. It also holds a record of environmental destruction. Therefore decades after reservoir completion significant resources are still devoted by the company to offset its disastrous impact on biodiversity and well-being of local communities. In contrast to many other Latin American large reservoirs Itaipu has relatively low carbon emissions per unit energy production, but enormous size of the project still results in 235,469 tonnes CO2 equivalent of annual emissions according to UNFCCC. Comparing those with "equivalent emissions from a similar-size coal-power plant" nowadays makes little sense, as solar and wind farms provide less impact and can be built at significantly smaller costs than hydropower.

Being very visible company controlled by two governments the Itaipu Binacional is known to implement some innovative conservation mitigation measures, but all those are still unlikely to offset its enormous impact on the freshwater and forest ecosystems and their vital service to local communities.

However, next week those obligatory mitigation measures and hydropower megaprojects as such will be marketed at Climate COP24 in Poland as "hydropower contribution to climate action". This transformation was made possible with generous USD 1,6 million "mobilized" for the program from the industry by UN DESA.

In previous years the same UN DESA was known to engage in questionable promotion of other megaprojects with major environmental impacts, like Global Energy Interconnection initiated by China State Grid Co. which is striving to develop giant "energy bases" on all remaining free-flowing rivers of the world and gigantic transmission lines to bring their energy to load centers.

Funny enough this greenwashing partnership is disguised as " increased involvement of non-Party stakeholders as foreseen in the Marrakesh Partnership for Global Climate Action (MPGCA)", while it is crystal clear that partners are large state-controlled enterprises from UN member-countries, not independent business entities.

As this shameful action happens at COP24 , another state-owned enterprise in Latin America – Colombian EPM is struggling to survive a major crisis at 2,4 GW Hydro-Ituango Project started in April-May 2018, which put at risk of drowning 120000 local people downstream and led to their mass- evacuation and suffering that still continues. This adds to long term dam-related woes of local residents and regular murders of human-rights activists who are confronting the EPM construction project policies and practices.

Hydro-Ituango Project, while still under construction, failed to withstand major climate-induced event – large flood on Cauca River complicated with rain-induced landslides. EPM had to sacrifice machinery and delay project completion by at least 3 years. Fortunately the dam so far has not collapsed completely, but prospects of its completion and successful operation are gloomy, while profitability for investors is likely already out of question. Unfinished project still presents mortal danger to downstream population.

According to forecasts the total cost of the emergency will nearly reach US$2.5 billion, including US$1.3 billion in lost energy sales, US$630 million in repair works and man hundred million in contingency expenses. The cost of the project had been estimated at US$4 billion before the construction problems began and may easily double, considering delays and loan repayments.

According to its web-site the EPM company already has accumulated a debt of USD 6 billion   and will face major repayments in 2019 and 2021. Now it is borrowing another 1,3 billion dollars from Bancolombia and HSBS. Company is also selling many lucrative assets to raise cash, such as windfarms in Chile. Chances for the EPM to remain solvent are slim.

Colombia’s National Authority of Environmental Licenses imposed a fine of 2,419 million pesos ($794,000) on Hidroeléctrica Ituango SA for violating environmental norms and ordered them to halt all operations not related to "contingency". The order required the company to hold all non-essential operations until they complete a series of requirements, including an expert review of the stability of the dam’s infrastructure.

In addition Hydro-Ituango Dam has been listed among top 10 recent natural and man-made catastrophes which have an impact on the underwriting results, pushing the global insurance market into the red for the first time in six years. Just one company Munich-Re slump in profits "stemmed from one of the largest losses in the construction market – damage to the Ituango Dam in Colombia, which gave rise to a EUR 501 million loss".

These contrasting examples vividly show that while getting support from international agencies for climate-washing hydropower megaprojects is reasonably cheap ( 0,02% of costs of a project like Ituango dam), the costs of these projects vulnerability to climate phenomena for owners and society at large are often prohibitively costly.

We wonder whether UN DESA will invite on this committee representatives of the communities affected in 2018 by major " Water and Energy interlinkages" such as Ituango dam incident or dam failure of Xe-Pian Xe-Namnoy hydropower project in Lao PDR.    .

We also recommend that lessons learned from those hydropower project failures are fully reflected in case-study collection prepared by the UN DESA.