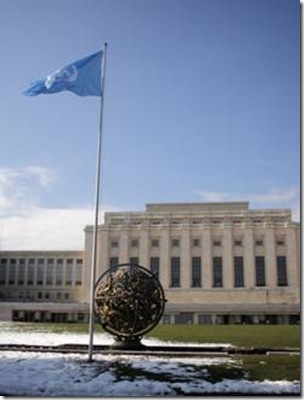 The meeting marked the transformation of the Programme into a global network of basins working on climate change adaptation. This endeavour, carried out in cooperation with the International Network of Basin Organizations (INBO), enables the comparison of methodologies and approaches, fosters exchange of experience and promotes a shared vision between the participating basins.

It addressed some issues related to transboundary adaption to climate changes and preparation of transboundary vulnerability assessments. The issues included the pilot projects working on adaptation measures progress review, sharing the lessons learned and planning of the future activities. Other objectives of the meeting were to discuss the development of basin-wide adaptation strategies, to prioritize measures and to launch a new global platform for exchanging experience on water and adaptation to climate change in transboundary basins. 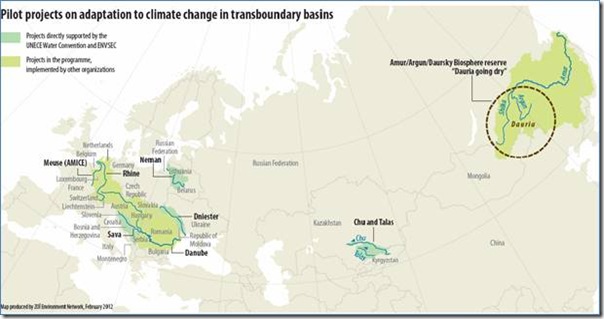 Projects on climate change adaptation in flood-prone regions included the Dniester, Neman, Drina, Sava transboundary basins (Europe), and the Congo basin (Africa). The concept of climate change vulnerability assessment based on the patterns of current and future climate as well as on ecological, economic and social situation in the Dniester River basin was completely realized in 2012. The common information platform, containing data on water resources management and adaptation to climate change for the Neman River basin countries, was developed last year.

The results of the pilot projects on drought-prone regions were presented by the participants working on the Sahara, Niger, Senegal (Africa), Chu Talas and Dauria areas (Asia).

Dauria Project report was represented by Oxana Nikitina from WWF Russia. We reported that 70% of the transboundary field monitoring network consisting of more than 200 plots in important sites system of long-term ground and remote-sensing monitoring of vegetation, animals, and anthropogenic pressure on wetlands was established by Autumn 2012 in the Dauria International Protected Area. The first report on the results of “Dauria Doing Dry” project was prepared for publication in Russian, English and Chinese. CD with new book in digital format were distributed among participants. 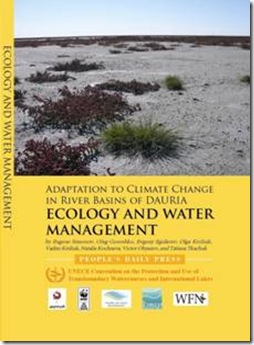 Developing basin-wide adaptation strategies and prioritizing measures were presented by the participants of the pilot projects of the Danube, Mekong, Rhine, and Meuse River basins. The study on the quantification of the impacts of future floods and low flows on the economy in the transnational Meuse Basin is now ready. In the summaries and reports, the method for flood risk calculation has been developed and outlined. The results are presented at both international and regional level.

Adaptation strategies and selecting measures were demonstrated as a part of the developed freshwater programme of the Dutch Delta Programme and Adaptation to climate change in Switzerland. The criteria of selecting measures presented in the Dutch Delta Programme include effectivity, measure costs, benefits and impact on agriculture, energy supply, fishery etc.

The participants discussed the possible integration of transboundary strategies into the national plans. In most basins some climate change impact assessments had already been done nationally, but using different methodologies and often not specifically for a particular river basin. This underlines the importance of developing joint scenarios, modelling and assessing vulnerability in all the riparian countries. 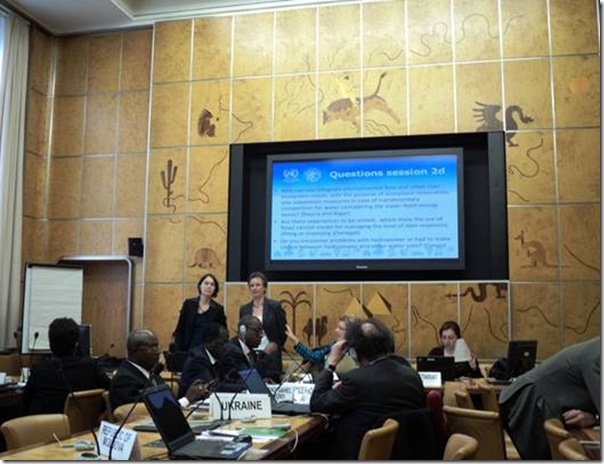 The UNECE Water Convention Secretariat and the meeting participants

The participants divided into several working groups worked on selecting and prioritizing adaptation measures, later sharing their results to the other groups. The participants discussed the approach, the selection criteria, the methodology and the timeline for the collection of good practices and lessons learned. In the area of climate change and transboundary cooperation it is crucial to bring together and involve both experts (or scientists) and policy-makers from the beginning, even in the project elaboration phase, in order to ensure ownership and political support of the results achieved. This can be done through the creation of a working group with all different stakeholders represented. A relevant example of this is the Dniester pilot project where decision makers were involved in the selection of sites for flood modelling.

The participants also discussed cooperation with other similar initiatives carried out by other organizations such as the World Meteorological Organization (WMO), the UN Frame Convention on Climate Change and Alliance for Global Water Adaption (AGWA) etc.

The meeting discussed the collection of good practices and lessons learned on climate changes adaptation in transboundary basins foreseen in the 2013-2015 work programme which is expected to launch at the seventh World Water Forum taking place in the Republic of Korea in 2015.