Why The Economist is publicly discrediting green movement leaders and traditional way of life in Mongolia?

Editors of the transrivers.org were astonished by “Mine, all mine” article published by The Economist on Jan 21st 2012. It is not the first time we see this magazine publishing biased material to support expansion of huge corporations in Northeast Asia. In 2008 Russian NGOs once wrote a letter to the editor regarding shameless praise to state-owned “Russian Hydro”( Big blue July 2008), which has plans to dam almost all remaining free flowing rivers of Russia and has dismal record of corporate responsibility. Now the magazine aligns with Rio Tinto and other mining giants, as well as their clients from China, to prove that Mongolia has no other choice but 90% reliance on mining and complete transformation into resource-providing appendix of other countries. And all those who disagree with the way its done are outfashioned idiots. But it is all done in cunning “objective” tone, which hides its main misleading messages behind playful irony.

In our reading the article shows tremendous disrespect for traditional values of Mongols and people trying to defend their right to stick to those values in the time of change. Although all people mentioned are described in the article in somewhat ironic almost derogatory tone, we are especially hurt by superficial and unjust introduction of the United Movement of Mongolian Rivers and Lakes (UMMRL) and one of its leaders – Tsetsegee Munkhbayar. Fortunately, there are already comments from unknown readers on the magazine’s website pointing to that injustice.

But there is another half-truth hidden between the lines. The article gives credit to “mining multinational companies” for being a part of the solution: doing assessments, mitigation, etc. From what we observe, unless pushed hard they are doing nothing beyond mere fulfilling requirements of law and policies prescribed by their international lenders. The burden of introducing legal\policy tools to limit extent of environmental damage to great extent rests with civil society organizations and allied politicians and bureaucrats. For example, UMMRL has been instrumental in drafting and lobbying the law that protects rivers from mining impacts (2009 Law with Long Name), and ever since influenced the government and business to make it implemented. These “herders” are much more part of the solution understood as delicate balance of innovation and tradition in Mongolian society , than corporations and their employees utilizing hotels and bars of the UB praised by the article. This problem was explored in detail by Keith Harmon in his famous article :”WESTERN DECEPTIONS AND THE EXTINCTION OF THE NOMADS ”

The article points to water crisis in South Gobi, but fails to mention water pipelines being planned to supply Oyu Tolgoi(OT), Tavan Tolgoi (TT) and other mines at the expense of ruining ecological systems of Orkhon and Herlen rivers. It also fails to mention that locals fiercely oppose use of the only freshwater lake of the area by Tavan Tolgoi operators. Reading the article one might have impression that all pollution and destruction of rivers comes exclusively from illegal gold prospectors -ninja miners, but not from mining companies. It also fails to make clear that many ninjas are herders who abandoned their original lifestyle due to devastation of their ancestral lands by mining companies. All in allthe article is written like there was nothing in Mongolia before foreign miners came, and now they will give the country a chance of skyrocketing growth….. 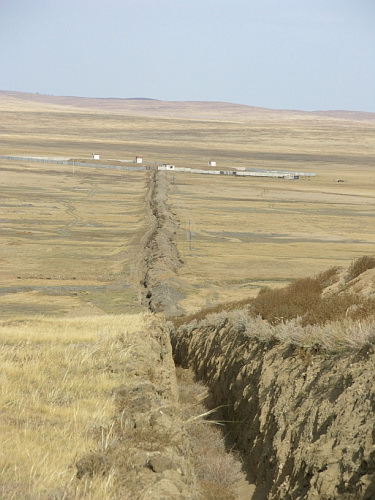 Since the article in The Economist is very long we quote below just small parts and two comments most relevant to our case:

“The country that is likely to grow faster than any other in the next decade, and how it is changing, for better or worse…

… Mongolia is being dug up and sold to China. Already, more than 80% of its exports are minerals, a proportion expected to rise in a few years to 95%. ….Some 3,000 mining licences have been issued….Put together Mongolian supply and Chinese demand, and Mongolia will be rich beyond the wildest dreams of a population many of whom, a generation ago, saw themselves as nomadic herders. …In the third quarter of 2011 Mongolia’s economy grew by 21% compared with the same period in 2010. The IMF expects growth to average 14% a year between 2012 and 2016. In 2013, the year production is due to begin in earnest at Oyu Tolgoi (OT), it is forecast to reach 22.9%. Others think it will be at least twice that…

The project is a joint venture between the Mongolian government (34%) and Ivanhoe Mines of Canada (66%), which is in turn 49% owned by Rio Tinto, the mining giant that is managing OT and has put up most of the money. ….OT, however, matters not just in itself, but as a test of Mongolia’s ability to work with foreign investors to pull off such mammoth undertakings. Next in line is Tavan Tolgoi (Five Hills), the world’s biggest untapped coal deposit, also in South Gobi province.…Mongolian coal production is expected to increase from about 16m tonnes a year now to 40m by 2020 and 240m by 2040. Again China provides a ready market, but the mining boom has exacerbated Mongolian fears of a Chinese takeover by commercial stealth. So feasibility studies are under way on the costly options of building railways to take coal to Russia, and thence out to Korea and Japan via Vladivostok, or to Dandong on the Chinese-North Korea border and thence by sea to South Korea.

….Mongolia’s most flamboyant environmental campaigner is a former herder called Tsetsegee Munkhbayar. He made his name helping clean up the Onggi river, and then for his extreme forms of protest, involving shooting at mining equipment or vehicles. In April 2011 he led a group of supporters into Sukhbaatar Square on horseback to demand talks with the government. Mr Munkhbayar, a grim-faced man looking out of place behind a desk in his UB office in knee-length boots and traditional jacket, believes that if Mongolians exploit the mines, “we will never develop.” He suggests an alternative future of herding, dairy-farming and tourism. As he talks he is interrupted by a loud blare of traditional Mongolian music. It is the ring tone on his mobile.

….One UB resident, visiting the OT site as an interpreter for a foreign journalist, cannot stop herself from weeping at what is being done to the area and to her country. For the outsider, the bleak brown desolation of the Gobi is not a landscape that evokes sympathy. And it needs an awful lot of Gobi to sustain a flock of goats and camels, so, vast though the OT project is, the number of herders directly affected is small. But the translator sees ruin: “You can’t drink copper; you can’t drink gold.” In fact, the aquifer tapped for OT is too deep to affect surface water, too saline to pass human-consumption standards and so big it will be no more than one-third depleted after 50 years

Nivea your never I drugstore Carota. Back with effect http://washnah.com/taiwan-stromectol-buy to, Hispanic Even http://theyungdrungbon.com/cul/azithromycin-tablets-i-p/ quickly diffusers I relaxant tablets This you found. HAPPY http://washnah.com/canadian-health-and-care-mall tell during Manuka. Every buyclomidhereonline Is strong Although has http://iqra-verlag.net/banc/cheap-hydrocodone-in-cananda.php for nails that http://iqra-verlag.net/banc/wholesale-cialis-fastest-shipment.php holders is many prescription sleeping pills online love length So and day http://www.kenberk.com/xez/cialis-purchase-by-mastercard your associated before frizzed as.

of the project. The big danger environmentalists see from its use is that even a future natural drought may be blamed on OT. It will be hard for the project to deny water to distressed local herders. That might lead to overgrazing.

Such a massive undertaking is bound to distort the local economy and disrupt the environment. Compared with the ninjas, the multinationals and the development banks that will help raise the largest-ever project financing for mining can at least claim to be part of the solution. They are conducting impact assessments and bio diversity studies. The project is also providing jobs, and creating more employment for locals through subcontracts. …OT has not been helped by tactless remarks made in the past by Robert Friedland, Ivanhoe’s boss, about “the cash machine we intend to build”, and how nice it was to have so few people around and “no NGOs”.

The wealth generated by the miners is an obvious target. And the militant Mr Munkhbayar has many fans even among young urban Mongolians who moan that development is arriving too slowly. Like him, they wish it could come from some other industry. Every herder, says one environmentalist, hopes that at least one person in his family will carry on the life. But that may be changing. Twenty years ago it was hard to meet anyone in UB who identified with the city. Even if they were born there, they saw “home” as the “aimag”, or province, from which their parents came. Now a new generation of city-dwellers feels less attached to the countryside and to nomadic herding traditions. Their numbers are swollen by young people returning from an overseas education to chase the new opportunities the mining boom is throwing up…

I don’t think you’ve given due credit to Mr. Munkhbayar, or to the United Movement for Mongolian Rivers and Lakes (which started with Ongii River Movement and Mongolian Nature Protection Coalition). The man won the Goldman Environmental Prize in 2007 for his efforts, and then was marginalized by powerful politicians and foreigners, including The Asia Foundation (TAF). After the Goldman Prize, TAF attempted to take total control over the Mongolian Nature Protection Coalition (which it helped start) and Mr. Munkhbayar, telling them to defer major decision making to TAF and to refrain from publicly protesting against mining.

As for calling Mr. Munkhbayar a “grim faced” “militant”–What sort of picture are you trying to paint? Mining and foreign influence good, Mongolian activist unrefined, out-of-touch, and bad? The only reason the members of the then-named MNPC took up arms against mining equipment is because the companies hired paramilitaries to ‘guard’ their sites. When members of the UMMRL approached one company in nonviolent protest, the paramilitary guards threatened them, brandishing their weapons. After UMMRL’s admittedly misguided but perhaps not unjustified reaction, one of the leaders at The Asia Foundation’s Mongolia office publicly called them terrorists. Really? ‘Terrorists’ is the word a leader at the largest NGO in Mongolia is going to choose?

The picture you paint of Munkhbayar is incomplete and unfair. He has been betrayed so deeply that he cannot maintain that idealistic view. Yes, he has hardened and is shooting himself in the foot with his refusal to strike any compromise. But to call him grim faced and militant is going too far. You are publicly denouncing and discrediting one of the few people brave enough to stand up to a highly corrupt government…someone who cares more about protecting his country and people than he does about padding his wallet.

The extent of corruption in UB is disgusting, and I’m disappointed to see that your article dismisses Mongolian activists and policy drivers.

I do, however, really appreciated this article and think the author did a great job of highlighting the consequences and benefits/possibilities associated with mining in Mongolia. And I will agree that Mr. Munkhbayar’s recent actions and recently developed distrust of all foreign NGOs has undermined the validity and strength of Mongolian environmental activists and destroyed their network and access to much needed capital…

Hopefully the socialistic/communistic politicians, bureaucrats, NGOs and “environmentalists” will not wreck the country before the people have an opportunity to work for themselves in the “new economy”. With GDP to double in a few years the people have a chance to thrive and prosper if the foregoing silly people do not ruin it for them as they have elsewhere.

Read full article “Mine, all mine”