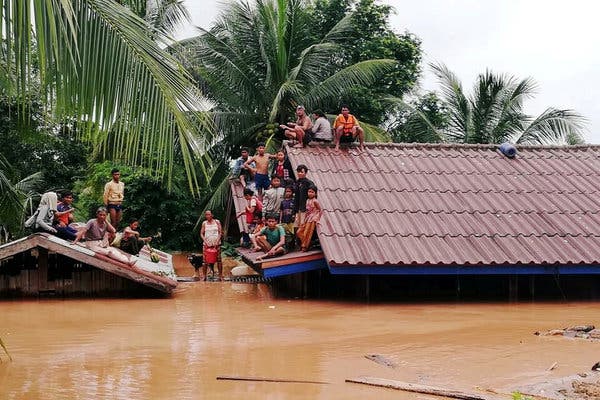 Dam-building industry has once again demonstrated its full neglect to human needs and rights.Monday evening, July 23, a  dam of the Xepian-Xe Nam Noy hydropower project in Southern Laos collapsed causing tremendous devastation in downstream villages and floodplains. This is at least the 4th major large dam failure during 2018, and with monsoon season to last for at least another 2 months it may be not the last one yet. Reservoirs are already full to the brim in Thailand, Northern India and many other Asian countries.  We publish a short note from  colleagues who have worked at the site. RwB

International Rivers expresses its concern and regret about the tragic loss of life and hardship facing communities living downstream of the collapsed dam in Lao PDR. An auxilary dam that was part of the Xepian-Xe Nam Noy hydropower scheme on the Xepian River collapsed the night of July 23 as heavy monsoon rains overtopped the dam. Communities living downstream were told to evacuate the area only hours before the dam collapsed. Initial reports indicate that 6,600 families have been displaced, losing their homes and property, while many were killed or remain missing.

During discussions we held with communities during the preparatory stages of the Xepian-Xe Nam Noy project in 2013, villagers took the strong position that before the dam was built, the project developers must meaningfully consult them and listen to their concerns. Like many other projects in Laos and the region, this did not happen. Many of the people affected by the current dam collapse have already suffered other impacts due to dam construction. This tragedy has compounded their suffering.

As rescue operations continue, the tragic event illustrates a number of risks related to dams: