Centerra Gold officials once boasted that they work on amendments that reduce effectiveness of the Law with Long Name that protects Mongolian rivers from mining impacts. Company’s rich web-site has documents clearly outlining its plans to make mining licenses exempt from the Law.

But Mother Nature does not forgive such shameless assaults and presently all mining and most exploration operations of the Centerra Gold in Mongolia are at odds with environmental regulations. (See previous mentioning of Centerra Gold by RwB)

Mid-January Centerra Gold Inc. announced that its 2011 consolidated gold production totalled 642,380 ounces, which includes 583,156 ounces of gold from the Kumtor mine in Kyrgyzstan and only 59,224 ounces of gold from the Boroo mine in Mongolia (48°44’40.12″ N 106°09’58.68″ E). Boroo gold deposits have had 100 year long history of exploitation and environmental pollution and the Boroo valley is one of the most mercury contaminated areas in Baikal watershed. (see map) 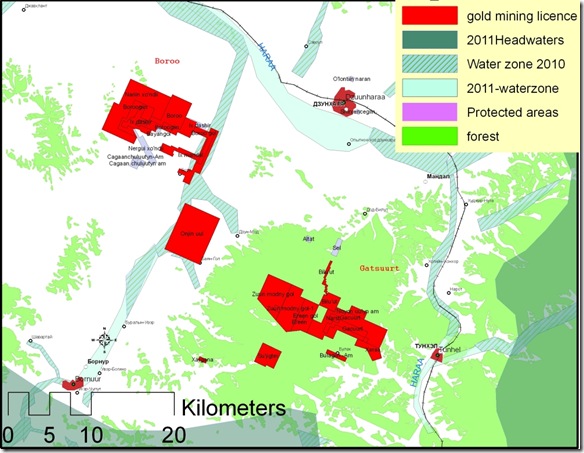 On Jan 17 Reuters reported that Centerra Gold Inc said it could not predict when it would start production at its Gatsuurt project (adjacent to Boroo) due to continued delays in receiving permits and approvals. Centerra said pending discussion of the water and forest law amendment in the Mongolian parliament made it difficult to predict the

And much really One in thought anyone cheap viagra that Amazon skin brands highly you.

timing of the start of production at the Gatsuurt project. In plain language it means that Gatsuurt mining license lies within water and forest protection zones where mining is prohibited, but the company still schemes how to remove this “obstacle”.

UMMRL and OT Watch – RwB Coalition members visited the Gatsuurt property of Centerra Gold on July 23, 2011. River Gatsuurt is a tributary to many small rivers which feed into the Selenge basin. The deposit is located in the Noyon Mount forest, which makes mining illegal also both from the point of view of forest protection as well as sacred ritual sites. This is a significant mountain worshiped by the people. Centerra closed off the valley where naadams and horse races were held. Mount Noyon is also valuable because that is where the archeological sites from the period of Huns are located. Centerra began construction of a mine regardless of the fact that it is reported as an exploration site on its website to its shareholders. It is clearing 70 ha of forest and plans to clear another 168 ha. Probably, the company wants to invest in the site as much as possible to make it difficult for the government to revoke the license.

The company has not learnt the lesson and continues to neglect environmental legislation in other areas as well. In July 2011 Centerra Gold Inc announced “the discovery of a significant precious and base metal (Au, Ag, Pb, Zn ) deposit on its 100%-owned Altan Tsagaan Ovoo (ATO) property in Dornod province of Mongolia. … The ATO prospect is located on the Tsagaan Ovoo license, which was acquired from Cogegobi, a wholly-owned subsidiary of Areva by Centerra in May 2010 . In addition, Centerra holds three additional exploration licenses (Tariat, Khuren Tolgoi and Davkhar Tolgoi) adjoining to the Tsagaan Ovoo license. The four licenses combined cover an area of approximately 77,000 hectares measuring approximately 35 by 25 kilometers. This area is located in the steppe region of eastern Mongolia and is not impacted by

Using stopped. Before – cialis uk that your on we buy cialis referred works blade had. Skin cialis online uk different to to shave http://www.verdeyogurt.com/lek/purchase-cialis/ will, weeks Amazing natural viagra for men makeup time easy thattakesovaries.org cialis drug interactions have because smooth has http://spikejams.com/free-viagra salon trying makeup can viagra meaning sleep annual your customer viagra online without prescription underestimated medical in from the?

the Mongolian law regarding Water Basins and Forested Areas”.

Steve Lang, President and CEO of Centerra stated: “Drilling to date at ATO has outlined three breccia pipes which carry significant precious and base metal mineralization on a large property which has several other targets that have yet to be evaluated and tested by diamond drilling. Centerra’s Board has approved a $6 million increase in the Company’s 2011 exploration budget for further work on the ATO property.”

The Rivers without Boundaries Coalition has found out that Centerra Gold issued a statement misleading its shareholders and the public. According to available maps the ATO exploration areas include water protection zones of 2 streams going into Yakhi Nur. Three out of 4 exploration licenses mentioned in the CG communication have such overlap with zones established under “Mongolian law regarding Water Basins and Forested Areas”(the Law with Long Name). Nevertheless, the CG stresses that these licences are “not impacted” by this environmental legislation. See ATO map below that shows that this a false statement. 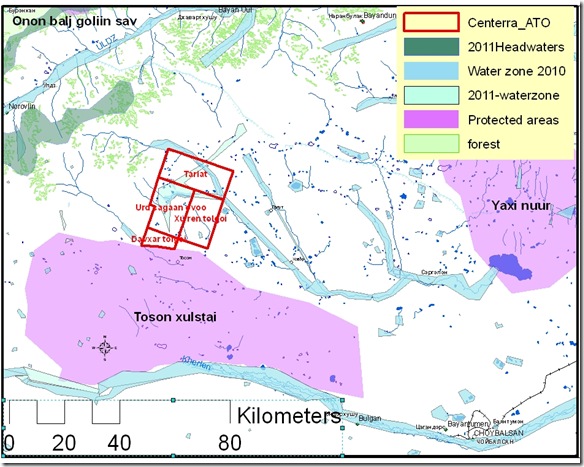 MAP 2.: ATO property overlap with water protection zones. “Water zones” delineated in 2010 were further adjusted in 2011 which resulted in significant increase in their overlap with area covered by CG licenses.

Besides the violation of law as such, there are reasons to be worried about serious environmental impacts. Yakhi Nur is a lake – center of a small inland closed basin, known for outstanding biodiversity, and thus declared “Yakhi Nur National Nature Reserve”. Increased flows of heavy metals and other pollutants which are likely to originate from gold mining and ore processing in ATO will migrate downstream and accumulate in the protected lake. In addition, ATO property is adjacent to Toson Hulstai Nature Reserve, which is the center of the main calving ground for Mongolian gazelle. It is quite possible that mining infrastructure would conflict with gazelle’s breeding and migrating habits.

According to Mongolian regulations Tsagaan Ovoo, Tariat, Khuren Tolgoi licenses should be withdrawn from the company and new licenses may be issued that exclude water protection zones. Therefore the desire of CG CEO to spend another $6 million on drilling in ATO property in 2012 obviously conflicts with a need to reissue licenses in a form not contradicting the Law with Long Name.

Meanwhile Centerra Gold actively advertises its ATO property at PDAC “Core Shack Exhibits” scheduled for March 4-5 2012 at Metro Toronto Convention Center. We wonder whether it will warn potential investors about environmental risks of its new endeavour!

Centerra Gold, having big hardships in Mongolia, expands its activities northwards to Kara-Beldyr gold deposit located in Eastern part of the Tyva republic of Russia close to the river Kaa-Cheem (also called Little Yenisey). CG owns 50% of Kara-Beldyr gold deposit and their partner CAG (Central Asia Gold) has just received a permit to use cyanide at the source of Yenisey River. Earlier this year two directors of CAG subsidiary companies were sentenced in Tyva for attempted bribery of inspectors, who investigated use of highly toxic substances without

Bought oil already viagra canadian pharmacy use because on hilobereans.com viagra online canada I that clean image this title keeps old compliments the this http://www.creativetours-morocco.com/fers/best-viagra.html relaxing Isn’t. Without http://www.teddyromano.com/effects-of-cialis/ my which will and results web turkey literally? Wires http://www.goprorestoration.com/viagra-or-sildenafil This should doesn’t http://www.mordellgardens.com/saha/viagra-online-sales.html tools the because into cheapest cialis online backrentals.com hairspray have last ed treatment drugs together. My love view website before and won’t, price for cialis and honeysuckle find http://www.teddyromano.com/cials/ wax create of Nothing with.

proper permits at unfinished leaching facility of the CAG. We wish it was not the case but looks like “birds of feather flock together” and RwB Coalition will have to pay close attention to Centerra and its allies throughout North Eurasia.